ITL #139 Storm warnings: developing a culture of foresight and responsiveness


Being properly prepared for when crisis strikes is vital. A culture of foresight built on solid data gives communicators the best chance of avoiding reputational damage. By Amybel Sánchez de Walther


In the course of their activities, organisations experience diverse crisis situations. These vary in degree and scope and may involve different publics and characters, both internally and externally.
Conflicts can last days or even months, depending on the nature of the problems and which solutions have been planned. This is an inevitable phenomenon in the lifetime of a company.
While the majority of organisations consider a crisis to be a negative event, a few take it as an opportunity to evaluate responsiveness and flexibility. It can be a time to identify weaknesses and limitations in order to fill some capability gaps and enhance the positioning of the organisation.
Emergency protocols deployed within an organisation to explore and analyse an emerging critical situation may prove to be too cumbersome – not really fit for purpose in today’s fast-paced digital world. And of course responding in a way that is inappropriate for the situation or that is simply too slow risks reputational damage.
New information and communication technologies can magnify and turn minimal dilemmas into huge scandals in only a few hours. There are countless examples of negative claims on Facebook or other social platforms that have spread like wildfire. Posts trashing an organisation’s values or specific activities, often supported with photos or video clips, can negatively impact a reputation at lightning speed.
Not necessarily bad to worse
But in the midst of a crisis, it should be remembered that social media is not necessarily an environment in which bad things are made worse. Social channels can be used as a means of identifying disputes between parties and reaching amicable agreements.
The way forward is to design a ‘lean’ crisis management capability that is closely related both to the workings of social media and the general communications policies of the organisation. The aim for public relations practitioners is to produce clear, coherent and consistent messages connected to the values of the company; a kind of management with a prompt response focussed on problem-solving and capable of dealing with the dizzying and unstable nature of cyberspace. And of course, this must be done in parallel with events occurring in the fields of traditional media complaints, public demonstrations and so on.
In addition, crisis prevention must not be overlooked. Of course, some crises come totally out of the blue. But with today’s data collection techniques (which involve continuous measurement and swift processing of information) more problems can be foreseen and anticipated than ever before.
Reliable estimates may be obtained to predict upcoming and underlying emergencies in the points of conflict. PR practitioners receive first-hand information and are in charge of deploying campaigns and explanatory contents in order to revert the state of uncertainty or social alarm into scenarios where there is an opportunity to get closer to key stakeholders, and to test the climates of opinion and reaction to specific issues.
A fruitful, circular process
As can be inferred, this diligent work implies processes of planning, coordination, responsible involvement during implementation, evolution and following up. As a whole, these stages comprise a fruitful and accumulative circular process, offering a significant background after each event which becomes useful when dealing with future crisis situations.
Foresight is useful, but does not equate to an impartial intervention. During crisis communications implementation, practitioners will from an early stage be confronted by familiar controversies and questioning. However, having a careful and attentive foresight culture means a more dialogical relationship with the stakeholders is viable. This in turn makes it more likely that problems can be solved.
To arrive at establishing an adequate culture of foresight at the internal level of the organisation, the traditional image of Public Relations as an area basically focussed on managing crisis situations must be reinvented. Although some crises and disputes have become so entrenched as to appear irreversible – I’m thinking  here of the battle lines drawn by opponents of the extractive and mining activities – foresight prevents lengthy and expensive terms of communicational crisis, which may lead to a loss of profits and reputation.
In that sense, diagnoses and foresight strategies emerge as possible alternatives that offer a climate of confidence and closeness to the interests, ideals and motivations of a diverse stakeholder base. Organisations prepared in this way to show concern about contemporary issues that impact the behaviour of the consumer and the market in general are far better-equipped to prosper in the critical and highly judgmental world we live in today.
Author’s Details
Dr. Amybel Sánchez is IPRA President for 2015. An IPRA member for eight years, she has been the representative member of the Latin American Chapter since 2010.
Currently, Dr. Sánchez serves as the Director of the Research Institute of the Professional School of Communication Sciences at Universidad de San Martín de Porres in Lima, Peru. She holds a PhD and MA in Communication and Public Relations. Her publications focus on the evolution of Public Relations in Peru within both an academic and professional context. As part of her contribution to the development of PR and communications, she serves as a jury member for several local and foreign associations.
Dr. Sánchez believes that an ever closer relationship between the business world and the academic community is essential in sharing knowledge and improving society. 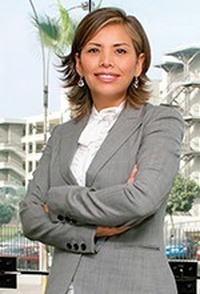 Dr. Amybel Sánchez is IPRA President for 2015. An IPRA member for eight years, she has been the representative member of the Latin American Chapter since 2010.