When hit by a network outage two years ago, UK mobile provider O2 experienced a barrage of complaints and abuse on social media. But an open and honest response helped make brand ambassadors out of customers who had previously felt let down. By Simon Lloyd


Radical advances in technology over the past decade and the resultant proliferation of new communications channels has led to a rethink of how communicators approach the concept of thought leadership.  For Corporate Communications purposes, the concept of creating thought leadership is pivotal in raising the profile of – and altering perceptions towards – an individual, or organisation.  That much hasn’t changed.
But what has changed is the sheer number of people today who enjoy instant access to information – and how this has led to a general democratisation of communications and information.  What was once a one-way street is now a roaring, multi-lane superhighway. And it is one that can easily become a white-line nightmare for organisations that fail to grasp the nettle.  Reputations can be equally built or battered at the click of a mouse.
Social channels like Facebook, Google and Instagram are not only offering alternative communication options, but also providing consumers with a way to seize control of company reputations – and even some business decisions.  These channels have put even more power into the hands of consumers who not only make empowered choices, but also influence others and strongly shape brand perceptions.
An IBM-commissioned study of the global telecommunications industry last year clearly validates the population of social networking, instant messaging, microblogs, Internet video and other over-the-top (OTT) communication applications and the associated challenges new conversation channels create for communication service providers. However, it also reveals important information about consumers’ spending priorities, how they make provider-related decisions, their loyalty triggers and more.
Driving brand passion
Telecoms service providers can use this information to drive brand passion and develop new strategies for customer service – including more self-service options.  In addition, service providers can take advantage of consumers’ willingness to collaborate on product and service improvements – and use the rising popularity of social media to do so.
A couple of years ago, UK mobile provider O2 turned a crisis into a real time demonstration of thought leadership.  In the summer of 2012, O2 experienced widespread network problems affecting hundreds of thousands of its customers.  Thousands of angry customers instantly took to Twitter to vent their frustrations at being starved of their connections, many threatening to cancel their contracts and move over to other networks.  @O2 was inundated.
During the two-day network outage, new Twitter followers increased from an average of 155 to 13,500 per day. Approaching the end of the first day, the mass of negative tweets had reached an estimated 1.7 million people.  O2 was in the midst of a PR nightmare.
It would have been easy for the O2 Twitter team to recoil behind their corporate bulwarks, responding with the textbook "we are sorry for this temporary disruption to our service, please bear with us", and replying only to those who didn´t issue violent threats or demand immediate compensation.  But this was not the case. O2 took everyone by surprise, not least its most voracious critics, by responding in the most open, honest and above all human way possible.  It’s as if O2 ripped up corporate guidelines and replaced them with your best friend.
From anger to approval
The success of O2’s response is evident in the way the majority of Twitter conversation quickly turned from an outpouring of anger to a celebration of the way the company was handling the crisis via its @O2 Twitter handle.  Anger or sadness quickly gave way to happiness or an expression of love for the @replies received.  This extraordinarily positive reaction far extended the reach of O2’s response, effectively turning attention away from the negative consequences of the network outage to its refreshing approach to customer engagement.
A vast majority of O2 customers who followed the brand in anger on Twitter are happily retained to this day, and the social media channel remains at the cornerstone of the company’s customer service.  O2 remains a byword for social media thought leadership – not just on Twitter, but retaining a formidable Facebook presence.
Other smart brands have begun recognising new trends and are exploiting them in other innovative ways.  For example, the increasing demand for visual data rather than written word has seen a greater exploitation of visual online platforms such as Instagram, Pinterest, You Tube, Vimeo, Vine, Snapchat and the like.
So has social media dramatically changed our approach to thought leadership strategy?  Some would argue that thought leadership has always differed radically from traditional top-down leadership.
In purely conceptual terms – if a junior executive shares a new idea with her CEO, then she is demonstrating thought leadership.  Thought leadership never had anything to do with hierarchy.  Today it is not just that junior executive who can share a new idea with the Chief Exec – anyone can do it.  Ordinary consumers of information (read: Joe Public) have perhaps never played a more active role in shaping corporate communication and public engagement strategies and, ultimately, business objectives as a whole.
Author’s Details
Simon Lloyd is European Head of External Communications at Telefónica, one of the world’s leading digital communications companies.  His Twitter handle is @SMLloyd 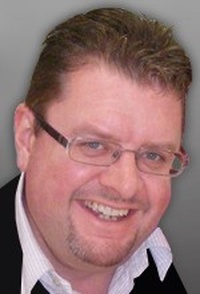 Simon Lloyd is European Head of External Communications at Telefónica, one of the world’s leading digital communications companies.