Measurement has been a concern for the PR profession for the best part of a century. Today, agreeing on value from the outset lies at the heart of true insight into whether communication is effective or not. By Tom Watson.


I have been asked to write a Thought Leader paper but am going to bend the rules and offer a ‘Practice Influencer’ paper because the topic to be discussed has been around forever (really, it has!) and the methodology is long-established yet it remains one of the vexed questions in PR.
My research on the measurement and evaluation of PR activity started in the early 1990s. Initially, I looked at the ‘how to’ questions – how to judge effectiveness in differing communication situations; how to separate outcomes from outputs (that took about two minutes); how to capture data and analyse it (Excel or SPSS solved that).
Then I moved on to ask ‘why don’t all PR practitioners set measurable objectives and then evaluate the outputs and outcomes, as a matter of common practice’. It seemed to me that this was the sensible and professional way to act. After all, there was plenty of ‘how-to’ information available.
By then IPRA had published Gold Paper No.11 – Public Relations Evaluation: Professional Accountability in 1994, Walter Lindenmann was writing excellent practice papers for IPRRE (now the Institute for Public Relations), while Glen Broom and David Dozier had published their very readable Using Research in Public Relations (1990), which had many practice case studies.
These were followed by campaigns promoting PR evaluation – the PRoof campaign in the UK being one of them. But still PR measurement evaluation stayed top of practitioners’ concerns on any number of studies into the issues that they wanted researched. It always ranked in the top three topics, mostly No.1. Ultimately, Paul Noble and I wroteEvaluating Public Relations for Kogan Page, which has had two editions (with a third to come this year) and been translated from English into Japanese, Korean and Russian (officially) and Chinese (unofficially).
Longstanding methods
The longer I have researched, the more I have found that methods of measuring PR’s effectiveness have around for a very long time.
From the beginning of the 20th century, when ‘public relations’ began to be widely used as the description for a set of communication activities, measurement practices can be identified.
Some methods used in the first decade of the last century would be familiar to practitioners now. One of these, called ‘The Barometer’, was used by the first known publicity agency in the US, The Publicity Bureau of Boston, according to Scott Cutlip. It was a card index of the attitudes of editors and media usage of publicity material. This allowed the agency to judge ‘whether a paper is "Good" or "Bad" from the standpoint (of its clients)’.
By the late 1930s, Arthur Page was using opinion polling extensively at AT&T and media analytics such as frequency, reach and favourability were commonplace in the US, especially in government communications. Around this time, Advertising Value Equivalence started to be used by publicists and press agents to show they could deliver messages cheaper than advertising.
Time to move on
I could give more examples from history and my observations of PR practice, but let’s move on and consider how to encourage PR practitioners to undertake the measurement and evaluation that everyone considers should be a basic tenet of professional PR practice.
Two years ago, one of my BA Public Relations students at Bournemouth University, Rebecca Moriarty, kindly gave me a coffee mug which she had made specially. In line with the fad for ‘Keep Calm’ themes that are everywhere in the UK, she had ‘"Keep Calm and Evaluate’ written on it (See the photo of the mug).
I thought she had found the magic elixir for PR measurement and evaluation: Don’t rush off and ‘do PR’; take a step back and prepare the campaign or programme with good research, proper planning and measurable objectives. Then monitor it with formative research as you proceed. Attitudes and practices like those change you from a technician to a manager and help you and the client or employer to get best value from the activity.
Agreeing on value
And value is an important issue to agree upon at the outset of planning. Just getting media coverage or social media buzz doesn’t deliver value; it is the contribution to the organisation’s functioning and development that provides real value whether it is related to economic or reputational objectives.
Recently, more sophisticated models have been introduced, especially for corporate PR operations and their advisers. In particular, the Communication Controlling (communication performance management) model has been developed in Central Europe by the German body, DPRG. It allows for activity to be monitored at several levels that progress from inputs to different types of outputs and outcomes. As it has been developed jointly by PR practitioners and academics with financial performance managers, there is wide acceptance of its validity amongst major German corporations. Importantly, it brings the PR director to the top management table alongside financial and operational managers.
These models will trickle down to smaller organisations of all kinds and simplified for lesser budgets and shorter-term campaigns. They are worth studying because they need ‘calm’ in order to set measurable objectives and assist valid and reliable measurement.
The opportunity for PR practitioners is there to apply well-proven methods and develop more effective campaigns. All the information is ready and waiting. As Rebecca’s coffee mug says, Keep Calm and Evaluate.
Thought Leader Profile
Tom Watson PhD is Professor of Public Relations in the Media School at Bournemouth University in England. Among his many publications is Evaluating Public Relations: A best practice guide to public relations planning, research and evaluation, co-authored with Paul Noble and published by Kogan Page. The third edition will be published in 2014. Tom also curates the IPRA archive, which is held at BU, and organises the annual International History of Public Relations Conference. 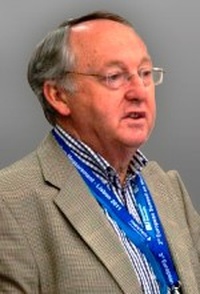 Tom Watson PhD is Professor of Public Relations in the Media School at Bournemouth University in England. Among his many publications is Evaluating Public Relations: A best practice guide to public relations planning, research and evaluation.