ITL #490 Championing the best candidates: why the hell diversity in PR?


Saddling job candidates with the diversity tag can be demeaning. Moreover, we need to stop calling what we do PR. By Neeraj Jha.

Of late I’ve found a growing number of Indian companies wanting to hire a “diversity” candidate for a “PR” role. I haven’t seen such an advertisement for Finance, Treasury or Audit, or Investment Banking functions. I haven’t heard of Diversity CEOs either. They just hire the best. Period.

In my 26-year career, I haven’t seen any evidence that might suggest PR is a job a female can do better or vice versa. So why diversity in PR? Is it because it’s seen as a lesser job in the context of an organization that can be used to tick those boxes that make it look good “socially”.

In either case, the practice doesn’t bode well for the future of the profession or those practicing it. As a well-wisher of the fraternity, I’m both worried and disturbed, and feel obliged to question it and trigger a debate. That’s the intent of this piece. Hope I succeed.

Diversity is a bad tag

Irrespective of the calling, the diversity tag is bad. Bad for the person (candidate), the position, and the profession, which is still stuttering; struggling to earn an honourable, respectable place for itself. Both within organisations, and in society. The worst sufferer is the person. Ask any qualified, self-respecting woman. She’ll tell us there can be no bigger insult than getting labelled a “diversity-candidate”. There’s something inherently demeaning about it, they say. And they’re right.

Then, there are these side-effects. Peers, colleagues in the organisation are likely to take the person’s “tag” more seriously than the person. They’ll be quick to declare her a “tick in the box”. It’s common - human perhaps - to take a dimmer view of a person who in their assessment has got it easy. This can hurt the person’s self-esteem. And a bruised self-esteem is the last thing she’d want for company in her organisational journey, which is anyway anything but easy and pleasant.

The journey of a “PR” person in an organisation (or even the department sometimes) often is a quest for identity and respectability. Anonymity, if not ignominy, often plagues them. What they do, why they exist is often shrouded in mystery. Other than managing headlines and “humouring” journalists, little is known of what they do. The general sentiment about them is of indifference.

The majority see PR as a “soft” skill. The evidence is that it trails its peer big time on gravitas, respect, and often, the pay cheque that goes with the position. This needs to change.

The answer is to hire the Best, male or female. Building a positive public image is a serious, intense business. There’s nothing “soft” about it. Even if we take the most rudimentary definition of PR which is “building positive public image for the Organisation/Corporate by disseminating the right news and information about it”, it is serious business. And it requires the best person, no less. One who understands and can straddle and manage the entire Reputation Value Chain and not just manage headlines.

Times have changed. And so has the job. Managing headlines is slowly but surely giving way to managing reputation, a much more elaborate and complex activity which calls for a sound understanding of the other pieces of the Reputation Value Chain, which invariably has a predominant constructive and proactive side to it.

The job also requires courage to ask tough questions, provide solutions; and also lead, drive and influence change as part of the solution. Several of the finest leaders I’ve known who’ve been doing it for years are women.

You should pay talented reputation managers as well as you pay your other key leadership roles. Pay is key and should reflect seniority. Besides, the designation, a position is judged by the cabin one occupies, its proximity to the corner office and so on.

And for god’s sake…stop calling it PR!

No more own-goals. The name spells neither respect nor gravitas. Whether we like it or not, it’s come to represent everything furtive, flimsy, and frivolous.

The word “PR” has never been part of my language, written or verbal. I’ve never said PR to describe my calling when asked. I’m scared I won’t be taken seriously. And it happened recently when at a seminar of senior leaders an elderly co-participant asked me what my job involves and how I spend my day at work.

I had to devote 15 minutes to explaining. After having slogged for 26 years! So, call it anything else but PR.

As a fraternity, it’s time we woke up and started shedding all that’s giving the profession its current image. Each one of us must also ask ourselves whether we have what it takes to be accorded a place on top of the organisation, and, if not, are we willing to go that extra mile to acquire those skills.

If we do this honestly, the result will start showing. 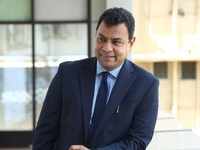