Businesses that fail to embrace new hybrid working models will become less competitive and may struggle when faced with emerging challenges. By James Lakie.

The remote working debate has again been reignited via a leaked email from Elon Musk stating staff were to return to the office full time or find alternative employment.

As a generation, the pandemic plunged us into unknown territory. For the best part of two years, the office was more akin to a desk in a bedroom, living room or dining room – for those lucky enough, a spare room became the command centre for all things work-related.

However, as we do in the PR industry, we adapted and showcased that some of the best work could be done from home. The daily commute suddenly became a thing of the past, resulting in time being a less precious commodity, providing an opportunity to crack on with the job at hand.

Since social restrictions have been lifted, many have adopted a more hybrid approach to working, which appears to be a favoured option at many PR agencies too. According to a 2022 report by the Office of National Statistics (ONS), hybrid working is on the rise while the proportion of those working exclusively from home is declining.

Furthermore, when respondents were asked why they continued to work from home in some capacity, the most common response was that it had become part of their routine, indicating we have adopted this way of working long-term.

However, this begs the question, why is Mr Musk, and several other CEOs, insisting people return to the office? Particularly when it’s been proven that people can work well in a home environment. Lest we forget, hybrid working is nothing new; people have been doing this for decades. The pandemic made it a necessity, a scenario we have adapted to and embraced.

In my opinion, one of the major benefits of hybrid working is the ability to tap into expertise from anywhere in the world. This allows agencies to cast their recruitment net further afield, which has become particularly pertinent as it becomes more difficult to attract talent. It also creates a competitive advantage for the agency over those not working in this manner.

There are of course benefits to employees too. Inflation is putting increasing pressure on household budgets. Petrol prices worldwide are reaching record highs - filling a standard 55-litre family car in the UK has passed the £100 threshold for the first time. The UAE is not immune to the rise in oil prices either, with many facing record prices at the forecourts. Therefore, nullifying or reducing the daily commute can have positive ramifications from a cost point of view and a timeliness factor.

We have also become more efficient. The initial hesitancy of video calling was replaced due to necessity, which has now become the norm for client meetings. Employee video calls are also becoming more interactive because of enhanced technology. A greater work-life balance, which has a more positive impact on mental health, is another reason the hybrid approach works for both the employee and employer.

I am aware of the counterarguments to the above – a video call will never be the same as meeting someone in person; working in a busy household is distracting and therefore counter-productive; working on your own for long periods can have an adverse effect on mental health. All are valid points. However, I would argue that we have done the hard yards during enforced lockdown periods and have learned how to utilise the time best and produce results.

Best of both worlds

I believe hybrid working brings together the best of both worlds, particularly when considering the industry we work in. Of course, office-based work has numerous benefits. A casual conversation can often get the creative juices flowing and change the course of a campaign for the better. The office environment can also create an infectious buzz which can generate momentum across the company. Client pitches are often improved, while contract wins are celebrated better as a team and in person. Even more important are the opportunities for those just starting in their careers to learn from more experienced staff members.

The above points are entirely valid. However, they lend weight to the argument for developing a hybrid workplace where we can maximise the positive opportunities afforded by both scenarios. Some of the early adopters of this, and those who continue to work in this manner, include a range of multinationals from sectors including tourism and hospitality, technology, fashion, oil and gas, and finance.

For the last two years, individuals have shown they can produce quality results away from the office, helping many agencies grow and win new contracts to benefit the bottom line.

For me, the challenges of not adopting new working models are two-fold, attracting talent, and retaining it. With the advancement in new technology, and the ability to work almost anywhere in the world, we are now more than ever competing on a global scale for the same business and talent. Therefore, I believe those failing to adapt will become less competitive and face many future challenges. 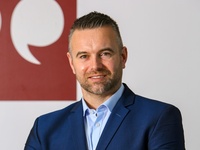 James Lakie has 20 years of experience working in the PR industry in the Middle East and the UK. As general manager of Shamal Communications, James is responsible for developing strategies and implementing plans for various accounts within sectors including healthcare, energy, real estate, security, facilities management, construction, technology, and tourism.