ITL #456   True green: how corporate governance can save humanity from itself


If all goes to plan, the new International Sustainability Standards Board will apply the principles of public company financial reporting to every aspect of ESG disclosure. By Matt Peacock.

“Youth is easily deceived because it is quick to hope”. Aristotle clearly never tried to unglue a young climate activist’s hands from a motorway. In our rapidly warming world, it is the old who are more likely to express optimism about the future and the young who despair.

In a recent international survey, almost half of 16-25 year olds said climate concerns affect every aspect of their daily lives. Other research indicates a growing reluctance among the young to start a family. As one respondent said, “I don't want to birth children into a dying world”.

No wonder then that the outcome from COP26 in Glasgow felt like a betrayal to so many. The Glasgow Climate Pact is awash with linguistic gloop. Its core clauses contain 10 “urges”, 14 “recognises” and 10 “emphasises”. This is language of empathy, not action. The word “decides” appears six times, but only when describing the creation of yet another bureaucratic process to talk about climate change. Blah blah blah blah indeed, and a sharp contrast with the muscular tone of the 2015 Paris Agreement.

But sometimes what matters isn’t what’s immediately visible. Amid all the noise and bluster, COP26 also yielded the foundation of a new organisation that could make a big difference in the struggle to save humanity from itself. And the source of this potential salvation? The corporate governance movement.

First, some context. There isn’t enough time to prevent climatic disaster and simultaneously tear down capitalism in its entirety to build a wholly new (and theoretically more equitable) system in its place, as many would wish. Efforts to dismantle free market economies at speed have an ignoble history (if in doubt, ask a Venezuelan).

Conversely, efforts to bend rather than break capitalism as societal expectations change invariably succeed. Our daily lives reflect the outcome of hundreds of historical battles to soften the hard edges of market forces, from worker protection to pensions, education and healthcare. Capitalism has survived for centuries as the dominant means of organising human activity because it constantly morphs over time to meet human need.

One of the key aims of the Paris Agreement was to redirect capital towards solving rather than exacerbating the climate crisis. The principle that money should flow towards the good and away from the bad has since been seized on with enthusiasm by the capital markets. Over the last six years, ESG investment principles have moved from margin to mainstream.

That enthusiasm is driven by cold-eyed financial logic as well as a moral instinct (let’s not forget that an increasing proportion of investment community professionals are millennials). The climate crisis represents an existential threat to asset values. Property holdings and insurance company investments aren’t such a smart bet if a destructive 50-year storm happens every decade. And the most carbon-intensive companies risk becoming a ruinously unattractive investor proposition if the world sticks to the 1.5OC pathway set out in the Paris Agreement.

For example, the capital markets research firm MSCI recently reported that the cost of decarbonising the global energy sector in line with Paris would require investment equivalent to 175 years of total sector earnings. The numbers involved are mindblowing.

That’s the theory. Green capital chases out brown capital, and the pursuit of profit rescues the planet. But there’s a problem. What is green, exactly? And how does anyone really know, for sure, that green is green and not some kind of muddy olive that puts on its best green clothes when the visitors come round?

ESG has been dogged by poor measurability, low verifiability and inconsistent interpretation of data for years. Those flaws have enabled smart companies to play the system and present an ESG-friendly public face that belies the reality.

The UK online fashion retailer BooHoo is a salutary example, rated positively on ESG performance on the basis of the company’s own reporting until a newspaper investigation revealed serious problems in its UK supply chain. And those flaws have also enabled institutional investors to market ‘sustainable’ funds that on closer inspection are anything but.

Which brings us back to developments in Glasgow. The standards bodies responsible for ESG reporting frameworks joined forces with the body responsible for the global financial reporting framework to create a new entity, the International Sustainability Standards Board (ISSB). (For the ESG cognoscenti: the IIRC and SASB merged to form the VRF which then joined up with the CDSB to work with the IFRS Foundation to create the ISSB with inputs from the IASB and the FSB TCFD. We do love an acronym or ten in the ESG world).

“So what?”, your inner Greta Thunberg may thunder, “how does this fix anything?”. What it means (if all goes to plan) is the application of the principles of public company financial reporting – rigorous, consistent, heavily scrutinised – to every aspect of company and investor ESG disclosure. That’s a big challenge for senior executives who wouldn’t dream of fakery in the balance sheet but have no qualms about padding out sustainability communications with bloviating fluffery designed to mask years of inaction on ESG risks.

Capital caused the climate crisis, and capital can avert it. But that will only happen if there is unimpeachable data available that highlights the bluffers’ failures and allows the truly committed doers to shine. If the ISSB achieves its mandate, the boundary between greenwashing – crass but of limited consequence today – and a highly consequential breach of mandatory accounting standards will be very narrow indeed.

It also means that for communications professionals, fluency in ESG terminology will be as important as financial literacy in future. Ability to navigate company ESG materiality matrices will matter as much as understanding the P&L. Company and capital market ESG regulation may not have seized most people’s imaginations in the past, but it will shape many of our careers over the years ahead. And with perseverance, determination and good fortune, it may even provide cause for hope among the despondent young. 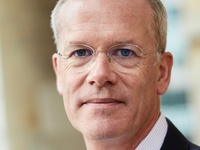 Matt Peacock is a Partner with the strategic and creative advisory firm Blurred specialising in ESG and Purpose. He was previously Group Director of Corporate Affairs at Vodafone where he led its global ESG and communications strategy. During his tenure, he created the Vodafone global sustainable business framework aligned with the UN Sustainable Development Goals and established one of the world's leading corporate human rights and transparency programmes.