ITL #455 Climate action and the role of communicators: fighting the state of denial


Agencies must question briefs. Are clients genuinely concerned about the environment, or are we being asked to churn out ESG friendly content just to make them look good? By Girish Balachandran.

I was born in South Delhi. Just before the pandemic-induced lockdowns took effect, I visited an old neighbourhood in which I grew up. Everything seemed smaller. Perhaps because I’m much taller now than I was then in my pre-teens. Or, perhaps, because our lives have become ‘bigger’ in so many ways. Bigger houses, bigger cars, bigger garages to reflect our ‘bigger’ aspirations. The park in which my friends and I used to play cricket is now a parking lot. The small things in our lives have had to make space for the bigger ones.

Meanwhile, millions of miles away, the world watched as the Amazon rainforest burned. It was not your regular forest fire caused by nature, like lightning or dry twigs acting as flints. This fire was man-made — farmers and land-grabbers wanted more land and decided to clear part of the Amazon forest. The blaze got out of hand causing major wildlife loss.

This act of burning and clearing land is not new. But its frequency has gone up over the years. When you factor in the support these “land clearers” get from governments and company lobbyists, this shapes up to be a concerning narrative.

Who can forget 15-year-old Greta Thunberg, as she went up the podium and asked global leaders the most crucial question, “How dare you? You have stolen my dreams and my childhood with your empty words.” While Prince Harry praised Greta for her emotional speech, ex-President Donald Trump personally made fun of Greta.

Climate change is a fact. The sudden changes in temperatures and the melting of glaciers are all visible. Yet, people, corporations and governments choose to ignore the massive carbon emissions and rally against climate activists. The reason is simple — the acknowledgement of climate change would mean drastic changes to be implemented in how business is conducted, how policy is formulated and in the small things we’ve taken for granted in our lifestyle.

The misleading campaigns — who benefits from it?

Climate change awareness goes back to the mid-1950s. The constant burning of fossil fuels has affected the Earth’s atmosphere causing drastic changes in climatic conditions. By 1968, studies had proved that carbon dioxide played a key role in pollution and was also termed as a ‘destructive weapon’ by geophysicist Gordon MacDonald.

Today, we have people like Senator James Inhofe, director of energy and global warming policy at CEI Myron Ebell, and Copenhagen Consensus Center founder and director Bjorn Lomborg saying that climate change is a hoax. They vehemently deny any theories supporting climatic degradation and they are winning. The reason is that they are fighting against passionate teenage activists who lack the expertise that lobbyists and corporate campaigners possess.

Governments have been trying, but the levels of corruption that have penetrated the deepest layers have caused major delays in bringing about stricter actions against these climate changes. Some of the key points raised by the UN chief António Guterres about entering the emergency mode were:

There is a very real threat to submerging of low-lying islands by the end of the century as it is estimated that by the end of this century, the globe will heat up by 2.4 degrees Celsius. And, the sad part is that this rise will occur even if countries meet the emission guidelines. The success of the paid propaganda of these fuel companies and the machinations of the deniers is seen in the final decision.

At the end of the summit, a strong course of action was finalized. But, the last moment loosening up of the terms by India and China did cause COP26 President Alok Sharma to feel apologetic towards the current generation. The softening was not about phasing out fossil fuel but phasing it down — a drastic change, given the climatic needs. While India has made remarkable strides in formulating climate friendly policies and created an enabling environment for more sustainable, environment conscious energy choices, the pace of the transition to a fossil-free future, needs further radical, disruptive thinking.

What can communicators do to help?

At a time when misinformation and propaganda campaigns run rampant, it has become our responsibility to be effective communicators — sharp, accurate and ethical in our views. And it begins with figuring out a better way to communicate the impact of climate change in a way that gathers support and pushes people to action.

Agencies tasked with the role of being communicators must question the briefs they’re responding to. Are the clients we’re working with genuinely concerned about the environment, or are we being tasked to churn out ESG friendly content to help make them look good?

Can we, as communicators, talk to celebrities about adapting slow fashion and see how people adapt to the same? Refuse to promote an organisation’s eco-friendly credentials if their core business is still rooted in fossil-fuels? Adopt campaigns on our own to get people to think about reducing the use of fossil fuels and switching to clean energy? Start with adopting environment-friendly policies for our businesses? Travel only when absolutely critical, print only when necessary, segregate our waste, get to net-zero first and then help our clients with their commitments?

Apart from starting within our own agencies, here are a few communication related areas that could also help:

Convincing those who are on the fence: Instead of spending our time trying to convince hard-liner climate change deniers, we can redirect our efforts to those who aren’t sure which side they belong to. Whether it’s creating more accessible resources for them or talking about it more often, we can gain traction by tapping into this particular audience.

Making it relatable: People aren’t inherently cruel. A CEO of a company making an environmentally-harmful company policy is not actively doing it as a way of harming the planet. On the contrary, they might not be aware of it. So, pushing the effects of climate change on a personal level gives them a reason to connect and make a change!

Figuring out the target audience and changing your messaging: While older people would prefer messaging that is more nostalgic, youngsters might be more motivated by the social impact of a movement! Different people respond to different things. Frame your message according to your audience.

Always have the data to back up your claims: Any time you go into a conversation about climate change, go in prepared. Have all the data ready, focus on published research notes and reliable sources. We can't fight disinformation with disinformation, and as responsible communicators, we need to be accountable as well.

It’s not easy to get people to change their minds, but we must persist. As communicators, we must lead the change from within, with ourselves first, our communities – our families, our workplace, our clients and our industry. In the words of the famous adage, “If not us, then who? If not now, then when?” 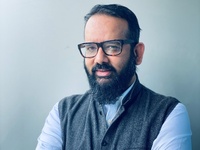 Girish Balachandran is the Managing Partner of On Purpose, a New Delhi based consultancy that works with brands on communications that drive social change.