Ceyda Aydede and George Flessas explain the reasons behind the merger of Turkish PR firm Global Tanitim and its Greek counterpart CIVITAS.

With a view to conquering the SE European market, CIVITAS and Global Tanitim, the leading Public Relations companies in Greece and Turkey, are merging. The aim in more broadly addressing the public relations markets in the region is to bring about new opportunities for employees and to create a united power that will better serve clients.

This development comes as the result of a very good and maturing relationship between George Flessas, head of CIVITAS and Ceyda Aydede, head of Global Tanitim. They share the belief that the future of the Public Relations consultancy lies outside national borders.

In this context, CIVITAS Group President George Flessas said that:

We have a lot to contribute to SE European developing markets by way of knowledge and experience and, thus, it is only natural to take that direction. Also, we do not forget that the majority of large, important Greek businesses now have activities in those countries.

We definitely wanted a company with a leading position. In a market such as Turkey, it is extremely difficult for one to start out as a small company with limited clientele, few executives and development prospects from the ground up, which would entail much higher investment on our part.

The second point is that we share the same concerns and visions with Ceyda Aydede, whom I have known for several years. Already in 2000-01 we had struck a strategic cooperation agreement. Ceyda has been a shareholder in our agency in Sofia since 2005 and now in our venture in Bucharest.

The fact of our good and tested relationship has sparked the next step. This is the maturation and result of a longstanding relationship. The most important point is that also Ceyda’s people, the Global leadership team, are capable of seeing the wider picture, which is very important.

The companies were two separate entities. Certainly, each company has a series of advantages to showcase, points in which it has more experience or specialization to demonstrate. We have already established a know-how exchange program.

Concerning our future international activities, let us not forget that Ceyda Aydede is a figure of international status in Public Relations and has also served as IPRA President. Therefore, she is a person with a multitude of contacts around the globe and very experienced in international relations. All this experience will be available at the Group service.

The Civitas successful course up to date is not my own personal achievement only. The greatest achievement of my business activities is that I have continuously kept at my side a team of first class executives, a powerful, dynamic management team who are capable of perceiving the needs of our market as well as the needs of the wider communication market, thus allowing us to plan our next steps together. ”

Strategic advantages of the merger

1. A powerful communication network is established in SE Europe, integrating the activities of the two companies in Bulgaria, Romania and Cyprus.
2. The needs of multinational clients are comprehensively served as they seek unified communication throughout the region.
3. The communication needs of Greek companies with activities in Turkey and other Balkan countries are met.
4. Know-how, methods and experience of the executives in the new venture become richer.

Also commenting on the motivation and the future prospects of the merger Global Tanitim President Ceyda Aydede states:

“In the 1990s, as communication technologies improved and allowed processes of work to evolve faster, public relations became much more integrated with the processes of business. Currently, the public relations sector develops and alters constantly and is becoming key to both businesses and daily life. It will not be an overstatement to argue public relations consultants play a critical role at effecting the decisions of important business people and help direct the future.

In this situation, as Global Tanitim, we have decided it is a necessity to extend our services beyond the borders of Turkey and develop Global as a corporate and international company.

Our attempts to reach the aforementioned goal started around 3 years ago. During this course, we did exchange ideas with CIVITAS Group President George Flessas, which concluded with George Flessas and CIVITAS Group Vice President Dinos Adrianopoulos coming to Turkey and offering a partnership. The possibility of becoming strong across our borders and extending our activities internationally attracted both companies.

George Flessas and I have known each other for almost 20 years and our companies CIVITAS-Global have been co-operating for almost 10 years. Nevertheless, the two companies took their first steps of building an associated company in 2005 with an office in Bulgaria, and in Romania in 2007. We have been lucky with our partnership because both companies had similar business cultures, which allowed us to continue and expand our partner endeavors

With the signing of the final agreement, the two companies jointly created the biggest and most powerful public relations firm that has operations in Turkey, Greece and Southeast Europe with a 16 million Euro turnover and 120 experienced employees providing services for more than 50 international and local clients.

The projection for the Europe-based holding company that will be established after the final evaluations is to enter markets like the Balkans and other Southeast European countries that have great potential. In this new holding company named as CIVITAS Global, CIVITAS Group Chairman George Flessas will be the chairman and I will be the vice chairman, in charge of the international relations. We strongly believe, at this new era we are entering, the effective synergy we can create by exchanging know-how can make our presence in the world far stronger.

While developing as a company, our co-operation will also provide great opportunities for our employees. They will learn from each others experiences and they will also have the chance to work in different countries.” 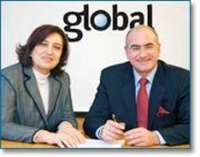