Women In Charge on Health


The dominance of women as health care decision makers means increasing attention is being paid to how and where this influential audience gets its health information and which sources are trusted the most. By Nancy Glick.

‘I am woman, hear me roar

In numbers too big to ignore

And I know too much to go back and pretend’


When Helen Reddy made these lyrics famous in her 1972 hit song I Am Woman, she could not have known that 36 years later, these words could be used to describe the dominant role that American women now play as the decision makers of health care.

As the primary coordinators of health care for the family, women shoulder most of the responsibility for the care provided to their children, spouses/partners, and elder relatives. Of equal importance, women now have the numbers – economic and demographic – and the savvy to effect far-reaching change in the health care marketplace, which is why health care marketers must understand how to reach them.

According to the U.S. Census Bureau, women now represent 51% of the U.S. population, which translates into more than 153 million people. Women also comprise a significant portion – 46% – of the labor market and at least partially own nearly half (48%) of all privately-held U.S. firms, according to the Center for Women’s Business Research. Thus, the earning power of women continues to escalate. As just one example, a 2002 study by Prudential Financial found that 37% live in households with annual incomes of $50,000 to $100,000 and 12% live in households with more than $100,000.

Taken together, these statistics document this undeniable fact: women represent an economic powerhouse, making over 85% of the consumer purchases in the U.S. and influencing over 95% of total goods and services sold (source: Competitive Edge Magazine and EPM’s Marketing to Women). This economic power gives women far-reaching possibilities to effect change, especially in the health care marketplace where they have increasingly taken on the role of “health manager” and are making the bulk of the health-related decisions for their children, their spouses, and their parents.

According to the first annual national women’s health survey issued in May 2005 by the National Women’s Health Resource Center (NWHRC), only 19% of those surveyed reported making their family health care decisions jointly with their spouse/partner while another 71% said they acted alone.

And when it comes to taking care of themselves, American women are increasingly smart about the range of issues affecting their health. In the same NWHRC survey, broad majorities of women, including older women, accurately reported needing annual preventative screening.

As the health managers for the American family, it is essential to know how to reach women who are at the nexus of most decisions regarding health care. Thus, increasing attention is being given to understanding where women get their health information and which sources they trust the most.

Among the organizations studying this question is the Center for Women’s Business Research, which reports that women are equally likely to rely on facts and information (47%) as they are on intuition, values and the quality of the relationship (53%) when making a decision. Similarly, NWHRC found that 67% of women trust the information provided by health care professionals more than any other source.

The established relationship between women and health care professionals underscores the need to promote a better dialogue between women and physicians, nurses and pharmacists about diagnostic screenings, diagnosing conditions, treatment options, and medicine compliance. This can include communications tools that will prepare women to ask questions of the clinician and consumer-oriented information provided in doctors’ waiting rooms.

Because women are now the slight majority of Web users, marketers must also understand how they use the Internet for health information. Here, the Pew Internet and American Life Project reported that women are looking for information that is easy to use, solutions-oriented and simple in design. Surveys also find that on the whole, women do not respond well to gender-oriented pastel print ads or Web sites unless the subject is specific to a women’s health concern, such as breast cancer.

Communications programs utilizing these touch points can raise awareness about health issues. But these outlets also require considerable frequency or exposure over time, which is why health educators must utilize a mix of media channels, including materials in waiting rooms and pharmacies and customized materials available online.

Ultimately, what women want is what Aretha Franklin sings about: respect. Marketers and educators recognizing the increasing role of women as decision makers will be successful in driving awareness and behavior change. A lot still needs to be done and the women are waiting. 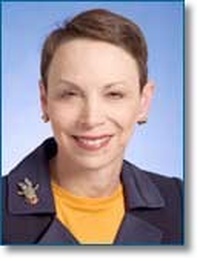 Nancy Glick is an executive vice president in Ruder Finn’s Washington office and is the director of health and nutrition affairs.