Futurists are not only curious, they’ve learned to train their curiosity to see things others don’t. Doing so allows them to anticipate customer needs to develop more effective communications. By Stephen Dupont.

Crystal balls, palm reading, and examining tea leaves: since ancient times, humans have looked for ways to glimpse into the future.

Although that ability still eludes us, technologically advanced predictive tools are helping to address our curiosity about the future, enabling us to forecast trends and identify the potential implications of those trends.

And yet, while those tools can help us as communicators and marketers to make better, smarter decisions about the future and spur growth and profitability for the organizations and brands we represent, there’s still a critical element that’s missing: the desire to look forward and wrestle with change.

Humans will face seismic events and trends in the coming years as the world’s population – currently at 7.7 billion people – jumps by two billion more by 2050. Among those events and trends: artificial intelligence, climate change, political polarization, mass migration, genetic engineering, the economic and military rise of China, driverless vehicles, deliveries via drone, virtual reality, the colonization of the Moon and Mars, and many others.

In a globalized world where we are all connected (e.g., YouTube has more than 2 billion viewers) these changes will affect how every person on our planet lives and works.

If there was just one reason why you need to start thinking like a futurist, it’s this: change on a scale that we’ve never seen before is coming and you need to start preparing yourself – and the organizations you represent – for it.

What a futurist mindset is, and is not

To develop my own futurist mindset, I have interviewed more than 25 experts (well-known futurists as well as experts in politics, generational marketing, real estate, blockchain, cryptocurrency, China, etc.) from around the world to gather insights about future trends and to learn how they think about the future.

What became very clear through those interviews is that change is accelerating at a rate where many of us will not be able keep pace. Some changes are coming that are so disruptive they will divide us even further than we already are. For example, imagine the paradigm shift that humans would need to make when the first human is successfully cloned.

Forecasting change is by its very nature uncertain. And that is at the core of the futurist mindset – being comfortable with a certain level of uncertainty.

So, how do futurists think? Here’s what I’ve learned so far:

From curiosity to empathy

At the core of the futurist mindset is curiosity. To some degree, we are all curious. But futurists are not only curious, they’ve learned to train their curiosity to see things others don’t.

Combine this quality with critical thinking and empathy for others, and that’s what makes a futurist mindset.

In what may, at first, seem like a silly example, consider such 1960s TV programs as Star Trek or The Jetsons. In those programs we saw the use of mobile devices (Star Trek), and a robot with artificial intelligence (Rosie) who was accepted as a member of the family (Jetsons). Today’s futurists can look for signposts within popular culture of what’s to come, such as the mainstream acceptance of personal robots in our homes. But not just robots that do tasks or provide information – robots that anticipate our needs and wants, and robots that just listen to us.

Imagine your child or grandchild one day identifying the family’s personal robot as their BFF. Huawei technologies predicts that 14% of homes worldwide will have a personal robot in the home by 2025.

Applying a futurist mindset to communications

Let’s put this into practical terms that you as a communicator can apply to your job. I have two recent experiences to share with you:

Driverless trucks – In working for a large U.S. over-the-road trucking firm, my firm conducted monthly interviews with the company’s truck drivers to build stories for recruitment purposes. Through these interviews, we learned that many drivers fear the loss of their jobs to driverless trucks. Based on information from major truck manufacturers issuing reports about testing such vehicles, those fears were grounded in fact. Because of this fear, many of those we interviewed expressed an interest in leaving trucking at some point in the future (sooner, rather than later) because they felt they “weren’t going to be needed.”

Instead of ignoring these fears, we interviewed the trucking firm’s customers (Fortune 1000 companies) and the company’s head of trucking technology. That process yielded information and insights we used to inform the drivers about the reality of driverless trucks (e.g., a driver will always be needed) and to alleviate their fears.

The future of construction – For another client, our firm has been conducting a state-wide awareness campaign to introduce young people, ages 10 to 21, to the idea of an apprenticeship program in the construction trades for young people (Gen Z and Alpha Gen) immediately following the completion of high school. The campaign was developed for a nonprofit that represents Minnesota’s construction industry, which anticipates a sharp decline in the number of skilled workers as Baby Boomer and Gen X construction workers retire over the next 10 years. Knowing that the demographics of Minnesota (and the entire United States) are changing, the campaign has a special emphasis – reaching out to young women and young people of color – to invite them to consider a career in construction in the future.

In an increasingly digital world of Fake News and Deep Fakes, building trust will matter more than ever before. Trust is the new oil.

There is no one better prepared to build trust in a fast-changing world than public relations and communications professionals who adhere to a code of ethics. As the world’s communicators, leaders look to us to shape the narratives that people need to understand what is happening and why it is happening.

When people (your customers, donors, voters, volunteers) fear change, they need leaders and organizations to step up and communicate in clear, authentic and relevant terms. Adopting a futurist mindset will help you anticipate customer needs to develop more effective communications. 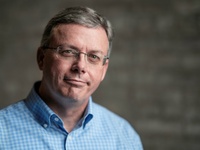 Stephen Dupont, APR, is VP of Public Relations and Branded Content for Pocket Hercules, a brand creative firm based in Minneapolis, Minnesota. He blogs at www.stephendupont.co.