ITL #325 Sweden: where polarisation is the new normal


A longstanding consensus culture has been replaced by people taking sides. What opportunities does the polarised discourse offer brands? By Deeped Niclas Strandh.

Sweden has suffered a severe polarisation of the public discourse. There are now only two standpoints: right or wrong. The classic right-left scale, or the newer Gal-Tan matrix, affects viewpoints more than the actual matter of fact. Community is defined by collective distance from those who hold opposing views.

This affects the political discussion, but it also affects brands. Progressive PR work needs to understand and be able to navigate through a fragmented and polarised media landscape.

This development is not particularly surprising as you can see the same things happening across the western world. But when it comes to Sweden, it perhaps hits a little harder.

Swedish politics and social debate have historically been based on reaching a kind of consensus in the end. There has been a fairly stable political landscape, with two big blocks and established rules for discussion. The pursuit of consensus has also fostered a culture in which people have been happy to avoid heated discussions and clashing views in their everyday lives.

Up until the 21st century, Sweden in many ways had a consensus culture, both in a public and private context. The so-called Jante Law – that dictates that, as an individual, one shouldn’t boast – has in many ways vaccinated society from polarisation. The traditional Swedish approach in a discussion has been that experts and politicians probably know best, and that we should just agree to disagree on some issues.

All this has changed. Today we see many more people explicitly taking a political stand and choosing sides. Discussion, across the same battle lines, is constant. In the past, people rarely shared their political affiliations. Today it’s common to share it on social media. And this doesn’t just apply to traditional political issues.

How could this change happen? We can see a number of fundamental points where the Swedish consensus culture was challenged and lost its hegemony.

This is what we see as the four most important explanations why polarisation is the new normal in Sweden. The development may seem frightening, and many analysts see big risks with a tendency like this in a small country like Sweden.

In the midst of this development, there are also a lot of brands that are meant to be present on the same platforms, to create visibility and to safeguard their business. That which used to be structured and easy to plan, is today a difficult-to-grasp and fragmented marketing landscape. Many brands see the public discussion as so risky that they retreat from it completely to only focus on activation and traditional sales messages.

But in the middle of this, brands have an opportunity to become someone worth listening to, someone who chooses to take a stand, but also maintains a measured tone. The polarisation creates demand for something else: credibility, security, and something to believe in.

We see four important strategic standpoints for brands in a polarised discourse.

We believe that it’s possible to do progressive and effective PR work even in a polarised discourse. Together with our clients, we can create effective, credible, and trustworthy marketing communications if we do it right.

Deeped Niclas Strandh is digital planner at JMWGolin and has been a planner since 2005. He focuses on digital communication and social media, with experience extending from major international companies, across municipalities and government agencies to public companies and startups. Deeped’s background is in behavioral science and theology, and almost 15 years ago finished as a priest in the church of Sweden. JMWGolin is part of the international Golin network, representing the Golin brand in the Nordic market. 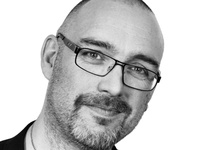 Deeped Niclas Strandh is digital planner at JMWGolin and has been a planner since 2005. He focuses on digital communication and social media, with experience extending from major international companies, across municipalities and government agencies to public companies and startups. Deeped’s background is in behavioral science and theology, and almost 15 years ago finished as a priest in the church of Sweden. JMWGolin is part of the international Golin network, representing the Golin brand in the Nordic market.