Due to pollution, environmental degradation and depletion of natural resources, our planet seems to be hurtling towards disaster. We all have a part to play in averting catastrophe by championing sustainability. By Alistair Peck.

Due to pollution, environmental degradation and depletion of natural resources, our planet seems to be hurtling towards disaster. We all have a part to play in averting catastrophe by championing sustainability. By Alistair Peck.

Two statements for you.

The first: according to NASA, April 2018 was the third warmest in 138 years since records began.  Secondly, in its report on Resource Use and Decoupling, the United Nations said:

“Global economic and social development over the last two centuries has been largely achieved through intensive, inefficient and unsustainable use of the earth’s finite resources. Given a world population that grows by 200,000 people each day and especially a rapidly growing global ‘middle class’ associated with resource-intensive consumption patterns, the demand  for  natural  resources  will continue  to  increase. According to the Global Footprint Network, if current economic and production trends persist, we will need the equivalent of two Earths to support us by 2030.”

Environmental degradation and pollution – in all its forms – is a Goliath of an issue.  People respond in different ways. After all, what can you or I, the lone individual, really do about it? It appears insurmountable. It’s a job for governments or manufacturers, maybe? We might actually prefer not to think about it at all. I mean, after the heart-warming thrill of the Britain’s Got Talent Final, it’s rather depressing to hear that a whale has died because it ingested 80 plastic bags.

In any case, we all probably believe that we do our bit. If you use hessian bags when you shop, you might feel that you bear no responsibility for killing that whale in Thailand.

You might also ask yourself why you’re reading this in an arena devoted to Communications.

Historically, in their drive to maximize quarterly profits, many companies asked similar questions.  This detachment from responsibility is, slowly but surely, coming to an end.

The concept of Sustainability – meeting the needs of the present without compromising the ability of future generations to meet their needs – is well known in resource heavy industries like manufacturing, clothing and the food sectors. After all, if you’re Coca Cola with a large market share in the Middle East, then you’d better start anticipating and mitigating the impact of climate change and drier conditions (and possible political upheaval) on your business.

Historically, it’s been seen as less relevant for the other industry sectors.  That’s changing fast. Sky, Apple, PWC and many other major brands have committed to and openly communicate their sustainability strategies and targets. Progressive companies like clothing company, Patagonia and delivery firm DHL have adopted Triple Bottom Line accounting, a framework through which they value their performance, not just in terms of profit, but also their impact on their people and the planet.

Sustainability – ensuring that businesses look after their people, their profits and their environment – is moving quickly from niche to mainstream.  Companies recognise that being seen as an organisation that promotes good stewardship of the environment and people delivers strong benefits.

The beauty of creating a culture of Sustainability – of looking after People, Planet and Profit – is that it’s good business sense.  All businesses appreciate the relationship between efficient use of resources, happy people and customers and profit.  Yet, there are other drivers too.  Many companies (HSBC is a good example) and government departments require that suppliers match their approach if they want to be considered for contracts.

There’s also the war for talent.  As public awareness of slavery, sweatshops and mental health (remember ‘People’?) and environmental degradation (there’s the ‘Planet’) has risen, so employers increasingly recognise the importance of social responsibility in attracting and retaining employees. This isn’t what some people might see as traditional CSR, by the way, those valiant colleagues gamely encouraging employees to volunteer at local charities for a day.

This is the understanding that Sustainability is good for the bottom line. It’s about embedding it in a company culture.   It’s the hope that, maybe, we can change the way that capitalism interacts with the world.  The move to reduce plastic usage is just one strand of that ambition.

My motivation in this – and I’m sorry if I come across as holier than thou, that’s not my intention; I’m as flawed and imperfect as the next person – stems from this quote:

“No snowflake in an avalanche ever feels responsible.”  Stanislaw Jerzy Lec, poet

In an environmental context, it highlights that every individual is responsible for the impact that, we cumulatively, have on the planet.  Equally, in a more positive way, it’s about recognising that millions of small actions by individuals can, together, create enormous change.

Let me give you an example. In a previous company, in our drive to be a more sustainable organisation, we discovered that a substantial cost (and Co2 emissions) occurred because booked taxis were waiting as meetings overran. We discovered that our corporate taxi supplier offered an app through which colleagues could notify their booked car that they were delayed.  The taxi company would then divert the car to another customer, scheduling another in its place at a more convenient time.  No idling taxis; less C02 emissions; a reduction in waiting time cost. From an employee communications perspective, that provides more positive messages than one that simply focuses on cost reduction.  A small change by itself, but if every company in the UK was to do it……

You might think that it’s cynical, greenwash even, wrapping a cost reduction up in environmental clothes. I disagree, of course. My view is the best way to achieve change is to ensure that your plans support the objectives of others (in this case the finance team, tasked with reducing travel costs).

Let’s not forget reputation, though.   It takes a long time for the public to forget or forgive corporate transgressions so it’s far better (and cheaper in the long run) to understand areas of risk, mitigate possible damage to your brand and turn that risk into an opportunity.  No communications professional wants to get a call from the Sunday Times asking why companies in their supply chain use child labour. No company wants to be the target of an activist campaign on social media because it’s not accredited by the Carbon Trust.

For the communications teams, improvements – reduction in C02 emissions, for example – have numerous outlets:  tender documents, recruitment fairs, employee communications, social and traditional media, stakeholder engagement programmes, marketing  programmes.  It’s relevant for the internal communications team and can directly improve employee engagement.  While some companies do a lot behind the scenes to reduce energy and water usage in UK offices, it’s often the visual changes – the replacement of plastic cups with Vegware, for example – that get the most positive results from employees.

It’s also, at the moment, a competitive differentiator. Supermarkets clearly see it as such and it won’t be long before plastic free aisles are standard in most supermarkets.

So why the title?

Well, there’s a publication that I subscribe to call Positive News. It describes itself as a “pioneer of ‘constructive journalism’ – an emerging approach in the media towards rigorous and relevant reporting that is focused on solutions.” Every edition takes care to profile individuals who have chosen to take on a Goliath of a social problem.   It’s heartening compared to the drumbeat of negative news from mainstream media.

So, whatever gender you are, we can all be a David. 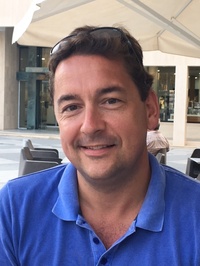 A Corporate Communications all-rounder, Alistair has spent his career working in both PR agencies and in-house communications teams including stints at Edelman, Mercer, Vantis and Hill and Knowlton. He is an affiliate member of the Institute of Corporate Social Responsibility and Sustainability, a keen cyclist, a very tired father and huge advocate of mindfulness.