Like the pharmaceuticals industry globally, the local industry in India faces its fair share of reputational challenges. By Seema Ahuja.

Dec. 28, 2014 was a black day for the aviation industry. AirAsia Flight QZ8501 crashed into the Java Sea, killing all 162 people on board. Immediately after news of the crash broke, AirAsia founder Tony Fernandes took to social media to express shock and sympathy and apologize for the loss of lives.

Over the next few days, Tony Fernandes and his airline leveraged social media extensively to provide updates to the passengers’ relatives on the recovery efforts, as well as expressed their remorse on the tragic incident and offered condolences for the loss of lives. They encouraged their staff to demonstrate compassion and empathy to the victims and their families.

A fatal crash can make or break the reputation of an airline. But it was AirAsia's ability to leverage social media to communicate clearly and effectively with diverse stakeholders that led a senior executive of a firm that advises companies on crisis management to comment that the airline had “prevented a crisis from turning into a reputational wreck.”

The industry has come under fire from patients and politicians for its unwillingness to fairly price medicines, for failing to bring the benefits of new medicines to those suffering from neglected diseases; and for not having patient-friendly strategies, among other things.

The CEO of a large multinational drug maker was recently on the receiving end of bitter criticism after the company sharply hiked prices for one of its widely used products. This was the latest among a series of reputation-damaging incidents that have given rise to the impression that the pharma industry is focused more on bettering profits than bettering human lives.

Managing reputation is paramount to the success of any business. A recent survey by Forbes Insights revealed that 88% of more than 300 executives, mostly senior executives and board directors, were focused explicitly on reputation risk as a key business challenge. Another study presented by World Economics showed that companies attribute about 25% of their market value to reputation.

This is because stakeholders today care more about what an organization stands for than what it sells. Today, there is higher scrutiny of organisational behaviour and corporate social responsibility than there was at any point of time before. The advent of social media has meant that no organization is immune to misdirected activism, whether or not they participate in social media. As a result of all these factors, reputation management is today a 24X7 imperative.

Like the pharma industry globally, the local industry in India has had to face its fair share of reputational challenges. Several leading Indian pharmaceutical companies received warnings for failing to meet the US Food and Drug Administration’s standards after the US regulator increased its scrutiny of local drug makers that have been steadily growing their market share in the US.

Alarmist media reports created an impression that the entire Indian pharma industry had lax quality standards, whereas a handful of Indian drug makers had been red-flagged for non-compliance with current good manufacturing practices (cGMPs). The fact is that non-compliance based warnings received by drug firms in India, which has the largest number of USFDA compliant manufacturing facilities outside the US, are not disproportionate to those of China and other countries.

To address the adverse publicity, individual companies as well as industry bodies engaged proactively with the media to correct perceptions and tackle biased reporting. Pharma journalists were educated to differentiate one action of the FDA from the other in terms of their severity.

The Indian pharma industry also had to deal with a spate of negative media coverage that misleadingly portrayed the entire industry as conducting clinical trials unethically and treating participating patients as “guinea pigs.” Media stories based on partial understanding of the issue and NGOs petitioning the courts resulted in a moratorium on clinical trials in the country. The government’s move threatened to destroy the innovation culture in India and hinder access to affordable treatment options for patients in the country.

Again, the pharma industry had to educate the media to ensure factual reporting. It was pointed out that clinical trials are conducted in India with the highest degree of transparency and with the complete consent of patients and families, disclosing not just potential benefits but also risks involved. It was important to get the media to understand that the entire clinical trials sector could not be held responsible for the misdoings of a few black sheep.

There was also a biased perception, especially in the Western media, about India not doing enough to protect intellectual property rights for pharma products. This narrative was also challenged and we clarified that India’s intellectual property policy was fully TRIPS compliant, even though it did not allow “evergreening” of patents that delayed access to new classes of drugs to patient populations in developing countries like ours.

In India, the pharma industry is highly regulated and subject to a multiplicity of controls and clearances. Any delay in obtaining even a single government clearance can make a company liable to reputational damage. This, even when the company is fully compliant and the delay is on account of the regulating department’s failure to respond on time.

In the age of social media, it can just take one irresponsible tweet or a news report in bad faith to flare up into an issue with the potential to harm a brand’s reputation. Unless countered swiftly the issue can precipitate a reputational crisis. This is because in the digital era negative news tends to stick around longer.

A recent study by the University of Warwick on how falsehoods and truths are spread on social media found that it takes more than 12 hours on average for a false claim to be debunked online. The analysis concluded that “tweets reporting unverified rumours spark a sudden burst of retweets within the very first minutes, showing that users tend to share early, unverified reports rather than later confirmations or debunks.”

I can say from my personal experience in handling crisis situations at several leading Indian organizations over the years that prompt and strategic action can not only kill a crisis but also convert negative buzz to positive sentiment in the public mindspace.

Here are the Top 5 Things that organizations need to do to effectively deal with crises.

An organization needs to have its ear to the ground to pick up what is being said about it so that it can quickly identify issues and address them before they can become a crisis. In the age of social media, not listening to social chatter or being absent on social communities can have serious repercussions for the brand. Organizations can today employ several ‘listening tools’ for following online conversations and red-flagging potential issues.

Organizations should be prepared with a clear standard operating procedure (SOP), which spells out who will do what when an issue crops up. Holding statements should be kept ready to ensure that spokespersons know what information to convey to the media in particular and the public at large when an issue breaks.

This is a no-brainer. Timely action can ensure that an organization is able to get into the conversation early in the cycle and shape it in a way that minimizes reputational damage.

During a crisis, it is critical for an organization to be honest and upfront.  If an organization admits to a mistake, apologizes, and acts to correct it, it helps maximize the brand’s credibility. Trying to cover-up or project untruths could boomerang and make things worse.

During the time of a crisis, an organization needs to show that it cares. By showing its humane side an organization can build trust and nurture its relationship with the stakeholders that will ensure a strong bond even after the crisis is over.

A threat to reputation can fast metamorphose into a crisis. So having a tested plan in place to address negative news in a timely and transparent manner will not only help preserve an organization’s reputation, but also demonstrate that it cares about its stakeholders and is willing to do everything in its power to address their concerns and live up to its reputation. 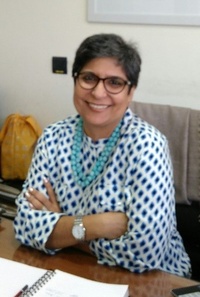 Seema Ahuja is Vice President and Global Head of Communications at Biocon, Bangalore. Biocon is India’s largest and only publicly-listed biotech Company. During a career lasting more than 25 years, Seema has played a critical role in reputation management and brand building for various leading companies in the Hospitality, Pharma, Life Sciences and Biotech sectors.