We can learn a huge amount from literature…and not only about how to write better. By Andrea Gissdal.

I would be lying if I said my mother’s misery has never given me pleasure.

The opening line in Avni Doshi’s Booker Prize-shortlisted novel Burnt Sugar offers a delicious taste of what is to come. Her economy with words belies the wealth of information and emotion she offers us in just one sentence.

As communications professionals, we can learn a lot from literature, and not just to write better corporate brochures and press releases.

If we want to share important news from our organisations, it is more important than ever that we consider what message we want to offer and to whom. And most importantly, what will make them care?

In contrast to our corporate messaging, works of fiction can make us feel angry, ecstatic, scared, joyful, and engaged in issues on an almost instinctive level. It can open our eyes to new worlds, new thoughts, and new arguments in old debates, and it does this precisely because it doesn’t just give them to us; it makes us work for them.

A novel is a collaboration by the author and the reader. It demands we walk in the shoes of the protagonist, no matter who they are and how little common ground we have. We experience the world through their senses, allowing us to draw on the experience of the fictional character.

So when I was asked to share my thoughts on the industry today, it is only natural that I draw on literature, and in this instance the blockbuster novel-turned-movie The Hunger Games.

Imagine you have grown up hungry in a poor coal mining town. The hollow ache in your stomach is as much a part of you as your own limbs. But you are used to it. You are fine, surviving. Then you are plucked from your home and your family, and shipped off to compete in a cruel game where you must kill or be killed for the entertainment of the citizens of Panem.

You are scared. You are angry. But you also know that getting the public, the viewers, to root for you can be the difference between life and death.

Enter Cinna, the PR strategist (who in this world goes by the title ‘stylist’). He knows appearances are important, but not without substance and context. The public may like a lynching, but they also love Love. Together with the District 12 campaign manager, Haymitch, he creates the approach that will deliver victory against all odds.

The strategy devised for Katniss and Peeta, our two District 12 tributes, teaches us this:

Make it authentic (but better). Cinna could have dressed them as coal miners, which would have been a true reflection of their roots. But coal is also the source of fire, which is a far more powerful image to project. There are more ways than one to be true to your brand.

Put on a show. There are times when being subtle works in your favour, but when you are going on stage seconds after all your competitors have paraded past, you are going to need to stand out. There are not many occasions when being on fire is advisable, but this was the one time they really needed to not just be seen, but noticed and remembered.

Create a human narrative. When Katniss and Peeta are first shown on TV, Cinna has told them to hold hands. In a competition where each contestant is supposed to be trying to kill all others, this simple gesture of affection is a power move.

It was the first step to creating the narrative of two teenagers in love, with the odds stacked against them. When they find each other in the arena during the games, their tenderness only emphasises the brutality of the other contestants.

This is the storyline that had the entire city of Panem gripped. While the viewers had tuned in for an exhibition of brute force and cunning, they had instead fallen in love with the two lovebirds from District 12, and they did not want it to end. Almost everyone watching could relate to the young couple, far more than they could relate to the other contestants; monsters killing for their own survival. Even when the monster is their own creation.

As a strategy, it was a gamble. But without it, they had nothing.

This leads us to the final take away from this story.

There is strength in partnership. Imagine for a moment that the public had not been taken with the burgeoning romance. Katniss and Peeta would still be better off together, than apart. They would be able to share their knowledge and skills, take turns keeping watch, and make better use of resources. No matter who you are, you will have partners, suppliers, or clients whose story would amplify yours and vice versa. This campaign works. For the first time ever, there are two victors, two survivors.

At this moment in history, we probably have more data, more analytical tools, and more delivery mechanisms available to us than ever before. It doesn’t mean anything unless you can use it to tell a story that will make your audience care. 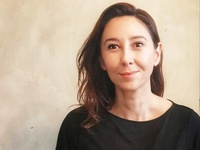 As Head of Communications and Marketing at Emirates Literature Foundation, a non-profit organisation based in Dubai, Andrea Gissdal’s mission is to spread the love of literature across the UAE and support the progress of the literary ecosystem.  Andrea is a firm believer in the power of stories to change hearts and minds, and this is the guiding principle in her professional life. She heads an integrated department combining PR, marketing, content, design, digital and web development, all working together to bring different messages to life for different audiences.   Mail the author Visit the author’s website