ITL #374 Science communications: the importance of facts in an increasingly faux science world


How can we address the proliferation of fake news and improve scientific literacy? By Carol Borchert

In 1455, in Mainz, Germany, a quiet communications revolution was taking place. Johannes Gutenberg, working in secrecy, had finally perfected his printing press with movable type, supercharging important movements of the time – the Renaissance, the Protestant Reformation and the Scientific Revolution, a series of events that marked the beginning of modern science.

Through the printed word then, and the electronic word now, as print proliferated so did scientific ideas and the sharing and critique of theories, experiments and discoveries. Old concepts were challenged and dismantled, sometimes at the risk of death to those who dared question known world order and beliefs. Science, over the centuries, advanced, as did the scientific method with its aspects of repeated testing, verification of theories and, perhaps most importantly, widespread communication of new knowledge.

Just over 500 years after Gutenberg debuted his printing press and all it enabled, we face a uniquely challenging time in scientific communications. One that has challenged concepts of authority, what is true and trusted, and changed how we fundamentally see the world. With the advent of the Internet and the World Wide Web in the early 1980s and 1990s respectively, anyone, anywhere can publish anything with little regard to truth or fact, at little consequence, and often for nefarious or financial reasons. One unfortunate result has been a proliferation of faux science and fake news – to the detriment of all societies and their citizens.

The organization I work for, Morris Animal Foundation, is a scientific organization that funds animal health studies to help cats, dogs, horses and wildlife worldwide live longer, healthier lives. Our mission is clear – advancing the health of animals by bridging science and resources. But science communications are essential to the work we do, as is the scientific literacy of the communities we serve and the donors who support us.

The danger of a disconnect

So what happens when we have a disconnect? We recently funded a study that showed the spread of a deadly virus to marine mammal populations in the Pacific Ocean from seal populations in the Atlantic Ocean. This transmission was possible because global climate change is shifting sea ice patterns and opening up passages heretofore unavailable to sea mammals or the diseases they carry.

During the last 25 years, marine morbilliviruses have infected whales, dolphins, porpoises and seals worldwide, resulting in the death of tens of thousands of marine mammals. Global climate change continues to threaten the well-being of wild species, from fanning the flames of bushfires in Australia – killing an estimated one billion animals (including many endangered species) – to bleaching coral reefs as oceans acidify.

But, according to a recent poll from the Yale Program on Scientific Communication, approximately 31% of Americans don’t believe in climate change, despite overwhelming scientific evidence. How do we align science with belief, especially if we have members of our audiences who fall into the climate deniers camp? Especially if, at the governmental level, we see efforts to diminish the voices of science.

At the Foundation, we do it by staying true to science, the facts and theories of science, scientific method and an evolving understanding of the world around us. We stand by data, scientific research and continued scientific inquiry because science is rarely settled, just simply and complexly refined.

In our social media channels, our blogs and our press releases, we share science, not opinion. That can sometimes be frustrating when journalists call for an opinion and we share data with judicious interpretation. It can be frustrating when someone is going for the click bait headline, and we dial back expectations to what the science supports.

It can challenge the beliefs of some of our supporters who advocate for a cancer treatment they saw online at a faux science website (which are proliferating), or question vaccines for their pets when we know the impact of vaccines for rabies, parvovirus and other infectious diseases has been world changing.

The proliferation of fake news, science deniers and faux science around the current COVID-19 pandemic is particularly disturbing as people fall prey to snake oil salesmen, untested treatments and inaccurate information dangerous to their health and that of their loved ones.

On the other hand, we are seeing a new public appreciation of the role science has to play in bringing this pandemic to an end. Our heroes are medical workers and first responders, Dr. Anthony Fauci (NIAID Director) and the legions of researchers working globally to find reliable diagnostic and antibody tests, new treatments and a viable vaccine. A renewed understanding of the necessity of science, and the dangers of denial, might help restore funding to struggling federal institutions such as the National Institutes of Health and the Centers for Disease Prevention and Control, as well as improve planning for the next global pandemic.

How can we address the proliferation of fake news and faux science, and improve scientific literacy? Each of us has a role to play.

Science requires long-term investment of time and treasure to refine, correct, rediscover and advance. But the trend line is always up. Since Gutenberg’s invention of the printing press and the Scientific Reformation, incredible advances in science have allowed for smallpox to be eradicated, humans to land on the moon, and information (true and false) to travel around the world at what feels like the speed of light.

However, it still remains in the hands and minds of people to use our incredible capacity for discovery and knowledge creation to solve the problems that challenge our world today. And faux science, fake news and science deniers have no role to play in that. 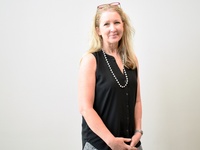