ITL #225 Women in the C-Suite: learning from a teenage scientist


A talented teenager’s fight to be taken seriously in the male-dominated world of STEM is inspirational and offers valuable pointers on how women can help one another succeed. By Claudia Gioia.

Whenever I have a chance, during my hours of long commute, I enjoy listening to WLRN. Primarily before 8 AM or after 5 PM…meaning I usually listen to the news.

Yet a few weeks ago, I had the pleasant surprise of finding a program known as Science Friday. In it, there was a wonderful interview with an admirable young lady, Amber Yang, who was recently awarded with the Intel Foundation Young Scientist Award for 2017.

It caught my attention for many reasons. First, the project Amber presented at the science fair was a quite impressive program addressing how space shuttles could avoid crashing into asteroids or space debris; or in technical words, “Multi-Orbit Space Debris Cloud Tracking Using Iterative Closest Points Registration with Machine Learning”. Secondly, and very close to my heart, Intel was a dear client of mine many years ago.

However, what I loved the most about the interview was that this young scientist was not just driven by the project and her love of science. She also had a “cause.”

Amber discussed how hard she had to fight as a girl in the STEM world to bring forth her ideas. Yes, the clean-cut and evidence-based world of Generation Z future scientists was as discriminatory as the generation that Marie Curie had to deal with about 100 years ago.

Amber was an outspoken young lady who shared how her cause was to empower more women to join the STEM world and educate society on how there is still a lot to do about women’s inclusion. Even among the “smartest” groups.

It’s not only about the challenges or the glass ceilings that women in previous generations faced. The new generations deal with this as well.

Amber explained that she was able to break through this invisible wall of indifference with the support of her mother, an engineer who has struggled with similar resistance herself. Amber is not only lucky to have a brilliant mind and a strong heart, but also a wise mother as a mentor.

I wonder how many more women would have been able to shatter the glass ceiling if they would have benefited from a sharp and supportive woman mentor beside them along their careers.

Not so long ago at work, when discussing mentorship programs at the corporate level, the expectation was to have a mentor who was way more senior than the mentee. Then, with the arrival of the digital revolution, the game changed and some brave C-Level leaders had to seek out younger colleagues as teachers. I don’t think that women truly recognize how much they have learned from peers and colleagues along the way, regardless of age… and more precisely women colleagues, irrespective of paycheck level.

Similar to the STEM world, in the executive-level corporate world, women are the minority. According to CNN Money, only 5% of CEO positions in the S&P 500 in the United States are held by women, clearly making it a male-dominated environment.

As the minority group, women need to work even harder to stand out, have their voices heard and make sure that what they say and do has an impact. To increase their ability to persuade, motivate and influence, women must be able to capitalize on their personality attributes and turn them into strengths and advantage points.

Just like Amber, women can also break through barriers and discrimination if they make a conscious decision to be more assertive and outspoken. For women in the C-Suite, specifically, communication skills can have a significant impact on their effectiveness, influence, and business outcomes. Studies show that when it comes to communication skills, women tend to be more emotional, consider many opinions hence taking longer in the decision-making process, and are often afraid to negotiate or be straightforward about what they want.

Women have great intuition—they are naturally wired to think, act and innovate. They need to take advantage of collaborative environments where listening skills and empathy are more highly valued. This allows women to be more supportive of each other and open the floor for exchange of ideas, which can lead to better results. This also serves as a great opportunity to mentor and guide each other along the way.

Women also need to have more confidence and be unapologetic. Women can’t be afraid to recognize who they are and what they bring to the table. They must seek courage and inspiration from those who have worked so hard to pave the way. Lastly, they need to ramp up their negotiation skills.

Very often women are afraid to go after what they want. Top women business leaders know better than to leave something on the table. They are not afraid to ask for what they want and strive to attain it.

We must recognize that achieving success takes fearless determination and true change can only come after unrelenting efforts. We must also recognize that the ones who make it to the top – and remain there – have worked extremely hard to overcome many barriers

But they have probably also been nurtured and supported by many others who may not personally have been interested in getting a leadership role. In the end, they are the ones that have genuinely made the difference.

In the words of Marie Curie: “Life is not easy for any of us. But what of that? We must have perseverance and above all confidence in ourselves. We must believe that we are gifted for something and that this thing must be attained.”

To that I would like to add that as women, it is essential to support, mentor and be there for one another. Just like Amber’s mom has been there for her. 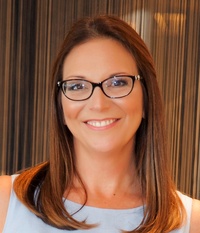