Arnold Palmer was a sporting great, both on and off the golf course. The way he connected with the public is a shining example for everybody involved in communications. By Peter Spurway.

It’s a well-established truth in our profession that, to communicate effectively with a target group, one must “know your audience”. We must understand their wants, needs and aspirations; their age, gender, socio- and psychographic profile, etc. All in order to better connect and ensure our messages – the vocabulary, timing and method – are tailored effectively.

What I would like you to consider is a corollary to that axiom.

Let your audience know you.

And I’m going to use one of the world’s, and my, all-time sporting heroes as a case in point.

His life had been chronicled widely over the past six decades, although it was his death in September last year that evoked an outpouring of affection and reverence rarely seen today. The emotional response transcended gentility, geography and gender. And it transcended sport, for Arnold Palmer was far more than a champion sportsman, regarded generally as one of the greatest golfers in history.

He was a trailblazer, an entrepreneur, an advertising icon, a pilot, a builder and a philanthropist. He was a central figure in a revolution, led by sports super-agent Mark McCormack. A revolution, that brought the formerly elitist game of golf to millions through the emerging medium of television. And who better to be the face of this revolution than the handsome, engaging, go-for-broke player from small town Latrobe, Pennsylvania?

Throughout his life, as he made his way around the world, often piloting his own jet, he touched millions with his humble, engaging, plain-spoken manner. He was as comfortable with kings and presidents as with common folk – and was equally loved and admired by all.

As Jerry Tarde wrote in Golf Digest, shortly after his death, “Palmer’s legacy stands even taller (than Jones or Hogan) because he’ll be remembered not only for the swashbuckling spirit he brought to the game, but more important, for the way he treated people. He always made the time.”

In Arnold Palmer’s home town of Latrobe, there is a large warehouse that is home to thousands of golf clubs with which he tinkered over the years.

It’s also home to every piece of fan mail he ever received, and to copies of his replies to each and every one. I can personally attest to this. I had been lucky enough to meet, chat with and get an autograph from Mr. Palmer in the early 1970s. (It is not a small point that Arnold Palmer had wonderful handwriting. The signature you see associated with his brand is a copy of his actual autograph. He often encouraged young players to take their time and sign clearly, and to look their fans in the eye and make that connection.)

Forty years later, I wrote him a letter recalling our meeting and what it had meant to me. Sure enough, a few weeks later, back came a wonderful response, signed with that same clear distinctive handwriting. Yes, a little shakier than the one from decades earlier, but definitely his.

Arnold Palmer led a broad, engaging life and he invited his fans and followers to be a part of it along with him.

Not only did he achieve greatness in his life, not only was he “The King”, he did it all while connecting deeply and authentically with his fans and followers: his world-wide “Arnie’s Army”.

When he met people, he looked them in the eye, smiled and gave them 100 per cent of his attention, focusing exclusively on them.

We need simply recall the way Arnold Palmer was described throughout his career, considering the deep affection that was reflected in the scores of tributes that followed his passing.

In today’s world of 100 distractions per second, it is sadly rare for any of us to get someone’s full attention, to have them be in the moment with us.

Equally sadly, and bad for our profession and our businesses, it can be just as rare for us to give someone our full attention.

As a “senior practitioner”, who once considered fax machines space-age magic, I have seen the insidious transition of human interaction over the past 30 years. It’s gotten to the point that we are surprised that someone actually answers the phone anymore. Perhaps because they’re surprised anyone would call them on the phone anymore.

So much of our interaction with others is out-of-body and non-verbal that we are losing the art of conversation, of opening ourselves up to another, of drawing someone in by sharing experiences and opportunities.

Something to consider when you’re communicating with clients and potential clients: As the number of face-to-face human interactions decreases, their value increases. Their scarcity increases their power and their worth.

To provide exemplary service to our clients, we need not only understand their business, we also need to understand them as people, understand what motivates and inspires them. They will be much more inclined to share with us when we share with them.

So, let’s all take time to consider how we are interacting with our “Army” – our colleagues, clients and families. Are we giving ourselves to them completely, or are our minds wandering to what else we could be doing at that moment? Let us commit to focus in those moments, to make it about them and what they want and need and how we can be part of their success.

Show your strengths, of course, but also share your challenges with your audiences in order to build trust, the cornerstone of any deep, lasting and mutually beneficial relationship. Share your ideas, inspirations, frustrations and triumphs – what our lives have taught us through our work and our families and communities that is relevant and useful in this moment.

Let’s commit to sharing ourselves and inviting others to share with us.

If we can achieve this, not only will it help us differentiate ourselves from the crowd, I dare say it would be a significant step toward improving our relationships with our families, colleagues and clients. 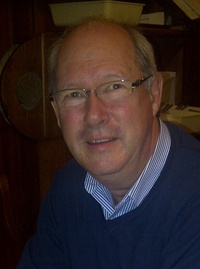