ITL #244 The Costa Concordia tragedy: how the trial turned into a meta-story


The sinking of cruise ship Costa Concordia was a terrible tragedy. The ensuing trial and its coverage held up a mirror to society and the media. By Luciano Luffarelli.

It was  on January the 13th, 2012, a Friday, when a ship with more than four thousand people on board hit a hidden rock close to the Isola del Giglio, in the Mediterranean Sea, sinking and causing the deaths of 32 people. Among those who died was a girl who slipped away from her father’s hand, falling in the water while crossing from one side to the other of the already inclined ship. They found both lifeless, hugged together, under the water.

Although the death toll was not as dramatic as for other shipwrecks, or similar incidents affecting or other public transportation, it was a story that had legs. During the course of the following three years, national and international media, especially broadcasters, kept on reporting about the investigations and the trial of the Captain which followed the accident. And they reported with a seldom seen intensity and tenacity.

The trial of Captain Francesco Schettino took place in Grosseto, a small city in Tuscany. On the day the verdict of multiple was delivered, correspondents from over 70 national and international outlets attended proceedings. Many people gathered to observe, so that the city felt like a theatre, with judges on the scene as in a play.

This was not simply symbolic. The trial turned out to be a day-by-day reporting on the fight between Schettino – presented as the only villain of the entire happenings – and the public prosecutors in Grosseto.  The former, in his mid-50s, representing the typical, Naples-born, astute Italian; the latter, embodying a national need for redemption.

The four magistrates, who were much smarter than him, were embodying the good side of Italy. As the good ones, they were shown as determined to destroy all the bias of an Italy previously incapable of punishing those who misbehave.

The ingredients – in some aspects, true ‘augmented reality’ – were all there: a woman present on scene during the accident who was Schettino’s lover; cocaine, allegedly circulating on the ship; ancient rivalries between Schettino and the rest of the bridge team; the appearance of a new lover for Schettino (an Italian Roman journalist); a couple of bags full of black money taken by a helicopter immediately after the accident; and a few others, which would be boring to list here.

Not to forget the wrecked ship, shocking and highly visible until at last it was removed. A dead giant always filling TV screens, all over the world.

The final result was unprecedented for a communication case: the more the trial went on, the more the company that hired Schettino was fading into the background. And so were its responsibilities. The company had actually somehow admitted these by negotiating a fine of one million euros and by assisting the other five convicted (all of the bridge team) who also negotiated a relatively light plea bargain.

The Captain and the company, at the moment of the accident ‘chemically’ the same thing – isn’t a company made up of the people who work for it? – had thus become something totally different, completely and ever-since separated. This had not been planned by Costa and its communication team: no way to predict and plan reactions to such a fluid situation.

Yet the result looked well under their eyes. For them, it was the best outcome.

At the same time, Francesco Schettino had helped to feed the process. Considered a boaster, never really admitting his responsibilities and inclined to anger, particularly towards journalists, he turned into a ‘character’ easy to manipulate and to bring onto the scene.

His wrongdoings had also been easily forgotten by the too many other ‘Schettinos’ circulating in our country (like the one who drove me on a bus to a survey of the wrecked ship, speeding at 100 km per hour on the way to the port), turning their face away from the mirror reflecting their own image.

Francesco Schettino, age 57 with one daughter, has eventually and definitely been convicted to serve around 16 years in prison. A few days before the third-degree ruling, he called a friend of his. “My baggage is ready”, he told him, knowing that there was no doubt that the High Court was going to confirm his guilt.

“What is sad, is that I was not able to tell the world my own story, and how sorry I was for those who had suffered for the accident. I was also not able to avoid a mechanism which for sure was stronger and bigger than me”.

Was he also referring to the media?

All images credited to the author: Luciano Luffarelli 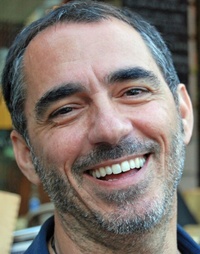 Luciano Luffarelli is Head of External Communication and Institutional Affairs at Piaggio Aerospace. He has held senior in-house comms roles at several different organisations, served as Executive Vice President, Corporate and Finance at Edelman Italy from 2012-2016 and is a previous National Chair for IPRA in Italy.