ITL #346 How to write an international text on public relations: a practical approach


Writing a book inevitably introduces you to new people and new concepts. And it’s hard to beat the sight of your own name on the cover. By Ellen Gunning.

When in 2002 I first had an idea to write a book, I had no idea that I would be travelling the world speaking at conferences about the contents of the third edition, published in October 2018.

The idea for this core text formed itself because I had been teaching PR and the text we were using was Jefkins (who was long dead). One of my lecturers suggested one evening that I should write a book myself…. and so began the journey. The first edition was published in 2003, the second in 2007.

The newest third edition was my biggest challenge. My publishers changed. The first two editions had been published by Gill and Macmillan, an Irish publishing house, whose focus was on the Irish Market. The text has been core text in all Irish universities and colleges teaching PR since it was first published in 2003. By 2017, Gill and Macmillan had ceased to be. Gill was no longer publishing academic texts, and Macmillan Higher Education in London had a different vision.

We began by looking at the content. So much had changed since the second edition. Many chapters were no longer relevant. I began by sketching the chapter titles and content – obviously we would have to keep “an appreciation of Public Relations” as an opening chapter. New entrants into the industry needed to be able to put it in context but, after that, it was a free for all.

I felt strongly that Ethics needed its own chapter, and we had to include chapters on the newer areas (since the last edition) of Content Creation and Storytelling, for example. The old reliables – Crisis PR, Political Public Relations, Sponsorship and Event Management would remain – but the content would be entirely new. We debated event management for a while – did it really belong in a PR text? Should it be an ‘additional resource’ for tutors? In the end we decided to leave it in. I really felt that, to exclude it, would be to fail to deal with an area which is still important to a lot of consultancies. The book needed ‘structural’ elements as well – how to set objectives, and identify publics, write proposals and know what everyone did in a PR department or PR consultancy.

Video and audio content…and no PowerPoint!

Then there was the issue of resources. Macmillan asked if I would create PowerPoints for each chapter. I said ‘no’. Honestly, life is too short to spend time creating PowerPoints!  Instead I offered to create video and audio content for each chapter which was much more fun for me and hopefully is much more engaging for the students.

When I first spoke with the Macmillan team that indicated that they would prefer an international text. I thought this was a wonderful idea and promptly agreed. There is no other text which looks at differences in practices and vision for the industry, globally.

It was a challenge that I could not resist. I love the industry that I work in, so setting off on a course of learning to find out more about international trends and practices was irresistible.

I found myself studying the Pepsi/Kendall Jenner advertisement, the role of social media in terrestrial television broadcast, the DIMICE model used for crowd safety at events, the creation of personas by Galaxy (chocolate bar), the incredible story of Daughters of Mother India, Tetra Pak’s devotion to environmental sustainability, Shell’s handling of the Ebola crisis in Nigeria and United Airlines’ treatment of their customers.

Along the way I got insights into politics in the USA, Canada, Italy and Greece. I looked at PR practice and differentiations in South East Asia, Europe and America. I was fascinated, enthralled, stimulated. I challenged and questioned and argued my way around the world by skype and email, and ‘met’ some of the best practitioners on the planet.

My research and writing style, however, are very unorthodox. Having agreed to write the book, I was given about 12 months in which to create and present the finished item. I have always, consistently, done things at the last minute – and writing my books has been no different.

I blocked off six weeks before the submission date and did all of my research, interviews and writing in that time. My style is to deep dive into anything that I do. I prefer to work that way. I find it stressful allocating a few hours each evening to something. I would much rather block out two days and get it all done. I drink millions of cups of strong tea, start early in the morning, work through until late at night, and don’t take my eyes off the project until it is done. For me, this style of writing is coherent – it’s easier to connect the dots, think of new examples to include, find a flow between the chapters when it is all being done in one single sitting effectively.

When the book was written, I sent it on its merry way to Macmillan and let them take it from there. They designed the cover (which I received in advance for approval) and created a series of sales video interviews with me one afternoon in London – we did about 15 in a two hour period – which covered the contents of each chapter, and then, a different interview for each of their target markets – Asia, Europe and America – based on the kinds of questions that their sales team would ask. They were very organised, very focused, very nice people to work with – but then, professionals always are!

My next involvement with the book really was when it was published, and Macmillan shared with me their plans for their sales team to push the book, globally, as a core text for PR students at universities worldwide. I suggested that I would also contact practitioners to let them know that the book was on the shelves and between us both, we would cover a lot of ground.

As it transpired, the practitioners have been responding magnificently to this text and I’ve been invited to speak at numerous conferences around the world. While there, I’ve been speaking with university students about topics from my book, and I’ve been meeting with practitioners to get a ‘boots on the ground’ interpretation of what is going on. It’s been a wonderful experience.

In 2019 alone I’ve spoken in cities as diverse as Maseru in the Kingdom of Lesotho, Tallinn the capital of Estonia and Sydney in Australia. Everywhere I’ve gone, I’ve also been speaking about my new business – the PR Training Academy – which is an online resource for PR Practitioners and I’ve been heartened by the response which indicates that, although our industry is extremely competitive, and differs in application across the globe, the need for upskilling and just keeping apace of change is the same the world over – and we all need our information in bite-sized chunks which are “Just in Time, Just Enough and Just for Me”.

Would I recommend writing a book? I think with every book that you write (I’ve written five in all) you stretch yourself to learn more so that your reader gets the maximum value from your text. A book inevitably introduces you to new people and new concepts. And you just can’t beat the sight of your own name on a book cover as its author.

Yes, I would definitely recommend it. 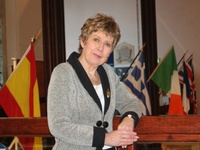 Ellen Gunning is author of Public Relations a Practical Approach, now in its third edition, and the founding director of the PR Training Academy, a global online resource for PR professionals.