Museums, educational institutions and tourism play a significant role in shaping international perceptions of a location and can pave the way for investment by foreign businesses. By Farzana Baduel.

Soft power is when a nation, country or state wins influence internationally by persuasion and appeal rather than by military force or political action. Moreover, soft power enables a country to engage with and attract global audiences in compelling and impactful ways.

Coined in 1990 by Professor Joseph Nye, ‘soft power’ has become a function across sophisticated and advanced cultures. It enhances a country’s brand and improves its positioning on the global stage.

Unlike military force, sanctions or political policy, soft power comes about through the accumulation of individuals and groups who engage with each other through different forms of cultural diplomacy. Whereas military force or sanctions can be unilaterally imposed on large numbers (a ‘top down’ approach) soft power works most effectively through networks of groups and individuals on a micro level.

Invariably, these activities happen almost organically, where people engage on a day-to-day level without the overt intent to exert political influence. Because of this, it is exceptionally difficult to monitor and measure the success of soft power. Evaluating outcomes is always more amorphous than the concept itself.

There are three fundamental factors that influence it:

Cultural establishments such as museums have increasingly become more important as platforms because they act as catalysts for cultural change, and contribute to the cultural intelligence and the diversity of those living in proximity.

Furthermore, we can see that the establishment of art galleries, museums, and cultural establishments inspires an increase in interest in a country or state as a cultural hub.

The establishment of the Guggenheim in both Abu Dhabi and Bilbao has attracted art-critics, lovers and enthusiasts across the globe to take an interest, elevating Bilbao and Abu Dhabi as cultural hubs on the global stage. The creation and establishment of such galleries or museums enhances the positioning of these locations internationally and therefore increases their ability to influence through a new persona.

The building of the Guggenheim Museum in Bilbao transformed the area from a post-industrial centre to a cultural tourism destination. This is demonstrated by the increase from 100,000 overnight stays in the region per year before the museum opened, to 800,000 thereafter.

These institutions also stimulate an increase in international tourism which furthers the effect of soft power.

The establishment of high-level colleges and universities helps raise the level of soft power for a country. When establishments of higher education are built and achieve high levels of academic excellence, there is also an increase in foreign demand and interest in them. This inspires foreign exchange programmes and international students from abroad.

This can be a fundamental contributor to the fortunes of any country. For example, between 1958 and 1988, 50,000 Russians visited the United States as part of formal exchange programs. Today, due to restrictive visa policies there has been a decrease in applications from foreign students to study in the United States. This has had detrimental long-term implications, where talented foreign students who are seeking a quality higher education will go elsewhere, meaning the USA will lose the opportunity to both influence and learn from foreign students. This will dramatically diminish America’s awareness of cultural differences, and reduce global empathy with the USA.

Tourism is affected by many factors, including exchange rates, climate, culture, history, and attractions. But if a country manages and cultivates a strong tourism industry, there are many benefits.  A tourist, after visiting a country, develops a deeper understanding of the place, which often leads to greater empathy. This can then turn into familiarity and (hopefully) likeability. This kind of branding helps enhance a country as a positive influence on the world, and albeit through micro-level engagements, can contribute to a strong impression on a macro-level.

It’s clear that tourism, cultural institutions, and educational establishments contribute to the soft power of the region, but let’s now look at the relationship between soft power and foreign direct investment (FDI).

Foreign direct investment is the investment by a firm or an individual into businesses outside of their home nation. All three factors mentioned above can also have an impact on financial investment.

Once there is an increase in tourism in a city, foreigners become more connected to the region which inspires an increase in curiosity about it, which in turn leads to enquiries about investment possibilities and opportunities within the region. In a recent study on South Africa, Sisa Ntshona, the chief executive officer for South African Tourism noted that the tourism sector accounts for 9% of South Africa’s GDP, and an estimated 8.5 % of the continent’s GDP, up from 6.8% in the previous 10 years since 1998.

The establishment of both cultural institutions and higher establishments of education inspires a confidence within the region, especially at their inception and therefore attracts all types of investment, including FDI.  Those countries, such as the UK, that have invested in establishing and building cultural institutions have seen as much as an increase in 2% in GDP over and above the predicted rate of GDP.

There is no doubt that the benefits of soft power are numerous. If a strategic and sustained approach is taken, it can result in a transformative brand positioning in a global context and in turn, attract long-term FDI, which is fundamental to economic growth. And, as seen in Bilbao, soft power can inspire the beginning of a refreshed narrative for any region, country, territory, or city.

Farzana Baduel is the founder and CEO of Curzon PR. As a passionate advocate of strategic communications, she champions the power of PR as a dynamic force for building bridges and unifying the world’s voices into a global narrative. She set up Curzon PR in 2009, having previously served as Vice Chair of Business Relations for the UK Conservative Party. 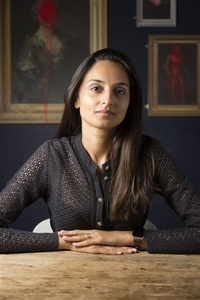 Farzana Baduel is the founder and CEO of Curzon PR. As a passionate advocate of strategic communications, she champions the power of PR as a dynamic force for building bridges and unifying the world’s voices into a global narrative. She set up Curzon PR in 2009, having previously served as Vice Chair of Business Relations for the UK Conservative Party.