The European Banking Federation is using fun online learning on an international scale to teach teenage schoolchildren about debt, compounding interest and other important lessons about saving and borrowing with a view to improving future financial wellbeing. By Raymond Frenken.

If you pay 15% interest on your credit card debt, how many years will it take for your debt to double if you do not pay back anything?

Is it ten years? Seven? Could it be five years?

There is a good chance that, like many others, you will have to give this some thought. You may want to run your own Excel calculation. When you do, you will probably find yourself – also like many others – surprised to learn that your debt can double in a mere five years if you are not careful.

This question is relevant as a real-life case for many credit users. In the United States, the average credit card debt stood at $6,354 at the end of 2017, according to Experian. That in a market where an interest rate of 15% is considered an ‘attractive’ low rate. Average debt levels for many households in Europe also are considerable and the rates are not very different here.

The question also is instrumental for testing financial literacy. At the European Banking Federation, we used it in the first-ever European Money Quiz played in March during European Money Week. Close to 50,000 kids from 28 countries took part, aged 13-15 years. The winners of national country finals, 50 kids from 25 countries, won a ticket to the European finals in Brussels in May.

As organizers we broke new ground in doing something highly innovative, not only in educating about finance, but also in offering teachers a fresh and engaging way of playing a live online quiz against other classrooms in the same countries at the very same time.

Just imagine the scene. The teacher tells his or her kids to clear their desks and get their mobile phones out. The smart-board shows a live YouTube stream, with a welcome screen for the European Money Quiz. The class logs in using a special code, gets to see how many other classes are participating in the live quiz, and then about 15 questions come, one by one. There is 15 seconds of thinking time, and 30 seconds to answer a multiple-choice question. Whoever gives the right answer first gets most points. In between the questions the screen shows an overview of who goes in the lead.

As EBF, we took the initiative for the European Money Quiz last year and found a partner in Norway-based online quiz host Kahoot! ‘Putting the fun back into learning’ is a key part of what they do. Millions of kids across the world are already familiar with the Kahoot! Platform. Many teachers also use Kahoot! to run their own quizzes to test kids in their classrooms. Kahoot! also made it possible to run the quiz in 21 different languages.

Running the quiz all over Europe was only possible thanks to intense cooperation with the national banking associations who are members of our federation. Each country decided for itself how to make the European Money Quiz part of their own financial education activities.

Financial education in some countries is more advanced than others, cultural differences exist and education systems often don’t match. The most successful examples of national financial literacy initiatives can be found in countries where the private and public sectors closely cooperate in national platforms dedicated to financial education.

Given the differences between national education systems it was a challenge to determine which schools and kids could be eligible to take part. To make it manageable, we offered the quiz to any classroom in Europe where the pupils were 13 or 15 years old at the beginning of the school year. In some countries, this meant the final year of primary school, while in others it was second year of high school.

We also chose this approach knowing that the questions would not be extremely difficult; the main objective being to get kids and teachers talking about how to responsibly handle money.

And in that we succeeded. The feedback from teachers – from both the north and south of Europe: Can you help us with teaching materials for financial education? Getting that question shows indeed that there is a need, a thirst, to learn more about finance and money.

The question about the time it takes for your debt to double was used in the European finals on 8 May in Brussels. Not a single participant managed to answer this correctly. Yes, it’s a tough one if you are 13 years old and only know that a credit card can help you to buy in-game credits in World of Warcraft or a dance in Fortnite. To be financially literate, this is something that needs to be understood.

The concept of ‘compounding interest’ is essential to understand for anyone taking on debt or adopting a retirement savings or investment plan. It is particularly relevant for young people trying to find their place in our increasingly digital society. We believe this core life skill is closely connected to one’s quality of life.

Financial literacy, or the lack thereof, has a major impact on decisions that people make. It affects key decisions in people’s lives when trying to balance a budget, buying a home, paying for their children’s education, and making sure that there is an income when retirement comes.

Statistics and surveys show that many people have very little understanding about finances, how credit works and long-term investments. Finances have a potential impact on people’s overall wellbeing. Even more so in our digital era, where everything – including money – is available at the touch of a screen.

Online shopping is easy but also offers a fast-track to accumulating debt. It’s not difficult to get into financial trouble. A lack of financial understanding is recognized as a root case for stress and a lower quality of life.

Digital money – banking apps – provide an attractive way of managing your bank accounts, with instant transfers and direct payments and information about accounts that is directly available on the screen of a mobile phone.  Especially young people are vulnerable, which is why financial education is needed in schools. Getting schools and educators to recognize this and to act on this is a long-term challenge.

Raymond Frenken is Head of Communications & Financial Literacy at the European Banking Federation. The EBF is the voice of the European banking sector, uniting 32 national banking associations in Europe that together represent some 3,500 banks – large and small, wholesale and retail, local and international – employing about two million people. 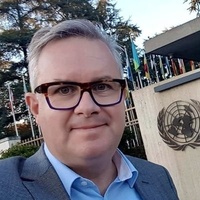 Raymond Frenken is Head of Communications & Financial Literacy at the European Banking Federation. The EBF is the voice of the European banking sector, uniting 32 national banking associations in Europe that together represent some 3,500 banks – large and small, wholesale and retail, local and international – employing about two million people.