ITL #275 - The game has changed: stop managing issues, solve them!


Simply trying to manage an issue is no longer enough. The public expects companies to tackle difficult problems head-on. By Christiaan Prins

The Edelman Trust Barometer 2018 found that business is considered to be an agent of change and that “64% believe a company can take actions that both increase profits and improve economic and social conditions in the community where it operates”. Society clearly considers companies as important entities in finding the solutions to complex issues about which they have concerns.

The flipside is that companies will be more and more held accountable whenever they are seen to be dodging their responsibilities. Moreover, whenever companies are not perceived to be offering solutions, they will be considered an accomplice to whatever problem is making the headlines.

I am hardly revealing anything new by stating that in today’s hyper-transparent (social) media landscape, operating under the radar as a company, however far removed from the end consumer you might be, is no longer an option.  If found implicated in an issue, companies are expected to take responsibility for that issue. What might be new is that businesses can use this to build a ‘purpose’ into their business strategy in order to understand how they can add even more value in today’s society

Building the counter-argument and engaging in one-way communication through a PR-campaign might have worked in a media landscape dominated by print and the occasional letter to the editor. But it is certainly not working on social media, where the critical reader will see through your lack of purpose in seconds, collecting likes and retweets along the way, making you the trending topic. Issue management has become the communications equivalent of gearing up for football, only to discover on the field that today’s game is rugby.

Clearly, issue management is no longer the solution. Issue-solving, however, is. And it comes in four steps. First of all, ownership for issue-solving should lie with the company’s executive committee, not the corporate communications department.

Ownership by the executive committee shows to the outside world that the company is approaching the issue from a corporate strategy perspective, and it will give its communications department the mandate to push for an ambitious solution.

Second, be proactive. Rather than waiting for an issue to be brought to your attention – and let’s be honest, most companies know their reputational vulnerabilities all too well – prepare a solution before it becomes a public issue.

Third, go public with your solution. The company should publicly recognize the issue at hand and express a clear willingness to solve the issue. Preferably, before the public is reminded of the issue by someone else.

Fourth, team up! The willingness to turn the issue in an opportunity for everyone offers an invitation to enter into a dialogue, which even the leading critical voices will find hard to refuse.  Issue-solving is by definition a participatory process, with the ultimate goal of building consensus; or at least a compromise.

To be very clear, this does not mean that a company has to “roll-over” for each issue discussed on social media. There is, after all, a lot of nonsense flying around on the digital highway.

But it does mean that as soon as an issue is potentially big enough to be impacting on corporate reputation, it is time start building an issue-solving strategy. In addition, a company does not need to have all the answers when engaging in the dialogue, nor do they have to agree to everything their critics are claiming. The place at the table is earned through the public intention of issue-solving; the actual solving of the issue will take time and stakeholder engagement.

At odds with trade bodies

It is important to underline that adopting an issue-solving approach will have additional ramifications beyond entering into discussions with your critics. Once a company has managed to find a credible position to solve the issue, it will likely find itself far adrift from the positions taken by its industry counterparts, in particular industry associations.

Industry associations have long been churning out position papers on issues that reflect the lowest common denominator, i.e. what their membership could agree to. Needless to say, these position papers are a far cry from what is required for issue-solving.

Issue-solving requires an industry position that should fit into a single Tweet (280 characters), “we support….”, or “we do not support…”, rather than “provided conditions X, Y, Z are fulfilled, we could consider….”. So as not to become the lone voice, companies that adopt issue-solving strategies should not only turn to their industry association for backing, but also consider building ad hoc (industry) coalitions around the issue at hand.

Alliances of the likeminded

This means letting go of the principle that industry should solely unite based on operating in the same sector. Instead, companies should organize with likeminded companies, whether they are active in aerospace, furniture, tires or FMCG, around the issue to be solved and drive clear, unambiguous positions that fit an issue-solving strategy.

To some, this might sound like music of the future. But many companies have already faced the new reality in communications and embraced issue-solving approaches. Especially those companies who have always been very sensitive to their corporate reputation and, in particular, the reputation of their brands: Fast Moving Consumer Goods companies.

For an interesting overview of companies that “get it”, have a look at the membership of issue-based coalitions such as the Tropical Forest Alliance (TFA), the Renewable Energy 100 (RE100) or the Cocoa and Forest Initiative. All are examples of issue-based coalitions intended to tackle an issue before it blows up in an industry’s face. They are turning the issue into an opportunity for society, the environment and their own business future.

Issue-solving requires a bit of courage from a company to critically assess its operations and open up for criticism. But they will find it infinitely more effective to build their corporate reputation by leveraging their purpose than issue management. Issues can no longer be managed in today’s media landscape, they need to be solved. 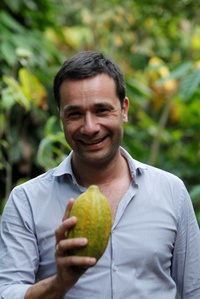 Christiaan Prins (born 2 April 1978 in Assen, the Netherlands), is since 2016 Head of External Affairs at Barry Callebaut. In that role Christiaan is responsible for all external communications in relation to sustainability, issue management and government relations. Previously, Christiaan worked for Unilever as Head of EU external affairs and was a policy advisor to a Member of the European Parliament. He holds a MA degree in International Relations, as well as a PhD in international relations from Groningen University.