Message from the IPRA President: Written on the body June 2017 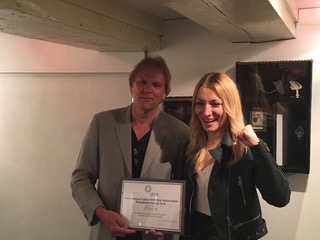 Last month, I sat down for lunch in Amsterdam with Inna Shevchenko, the premier founder of the women’s activist group FEMEN. We hadn’t met before, only communicated by email, and our initial conversation was typically characterized by finding a common shared interest. This quickly and predictably centered on the occasion for which we met, the awarding of the 2016 IPRA President Award to Inna and the activists of FEMEN. Inna had come to Amsterdam to receive the award during a small ceremony we held in the afternoon.

But before that, she told me during lunch about her expatriate and activist life, which has brought her from her native Ukraine to Paris where she found political asylum several years ago. Political activism had shaped her life even before that exile, but since the move to France she has built up FEMEN, obviously with the crucial participation of brave women protesters. It is now represented in some nine countries, including the US. Just days before we met, FEMEN had staged a protest in one of the outlying neighborhoods of Paris. It’s hard if sometimes impossible for women to walk in public spaces without being harassed in some shape or form. FEMEN had wanted to put this issue, long smoldering in many metropolitan cities, on the political and social agenda. Instead, it found itself embroiled in a debate constricted by political correctness. The mayor of Paris had stepped in and accused the organization of stigmatizing immigrant communities who make up a sizeable part of the Parisian banlieus. With characteristic defiance, Inna rejected the intervention. Freedom of speech reigns supreme above everything, she held, and the more so for this particular issue.

Talking about FEMEN it was unavoidable to touch upon its hallmark style of activism: the bare breasted protests of its participants. For Inna it is quite simple. Women are always looked at, she said, but rarely listened to. Writing their message on their topless bodies ensures visual attention on more than the usual level. ‘We began by protesting topless,’ she told, ‘and held out signs above us. But we then noticed that media would crop out the signs and just leave us topless in the published pictures. That was when we began to write on our bodies.’

Her life nowadays consists of much more than protesting. She recently co-wrote and published a book in France. She also travels much while giving presentations at conferences. One thing she was resigned about though it obviously still rankles her: the insults and threats directed at her online. A few years ago, while speaking at a conference in Denmark, a gunman burst into the venue and shot and killed two people. ‘The hall I spoke at was purposefully chosen for its lack of windows, so to increase security. Yet, I still had to run for my life.’ She found shelter in an apartment across from the parking lot of the venue. In fact, our meeting took place in Amsterdam because the FEMEN headquarters and training center in Paris is temporarily shut down for security reasons.

It was hard imagining this while sitting outside on a sunny day, overlooking the canals, and sipping wine. For me, it reconfirmed the choice for awarding the IPRA President Award to Inna and FEMEN. IPRA is about freedom of speech, freedom of information; and as professional communicators we know that the difficult or contrary message is always the hardest one to give in plain language. The message on the bodies of the FEMEN activists is the one which must be heard.