IPRA celebrates its 60th birthday in style: GWA Grand Prix is all about Saving 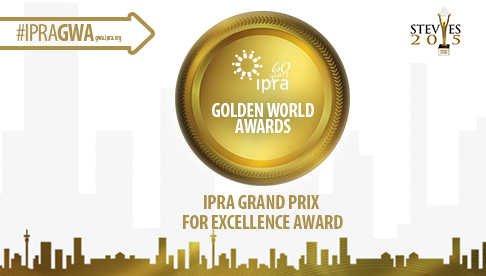 IPRA, the International Public Relations Association, celebrated its 60th anniversary in style last week at a congress in Johannesburg, South Africa with delegates from 38 countries. The Congress on the theme of leadership heard from a distinguished panel of speakers all leaders in their own right, from CEOs to social campaigners.

A key event of the Congress was the IPRA Golden World Awards for Excellence Gala at which over 50 awards were announced for the 2015 competition. The UN Award for social progress went to Sydney Convicts Rugby Union Club for their pioneering campaign Tackling Homophobia in Sport. And this year’s Grand Prix went to South African agency, Atmosphere Communications and King James Group, for their splendid campaign Sanlam: One Rand Man, aimed at focusing on the declining savings rate among consumers by paying a man’s monthly salary in one rand coins – a lot of one rand coins!

“As we judged the awards this year, it was fascinating to see the great efforts involved and how so many entries went beyond core business and core business targets” explains Amybel Sánchez de Walther, IPRA’s President. “We saw wonderful projects with well-structured action plans which led to sustainable results be they in sales, or environmental awareness, or well-being, or social change.”