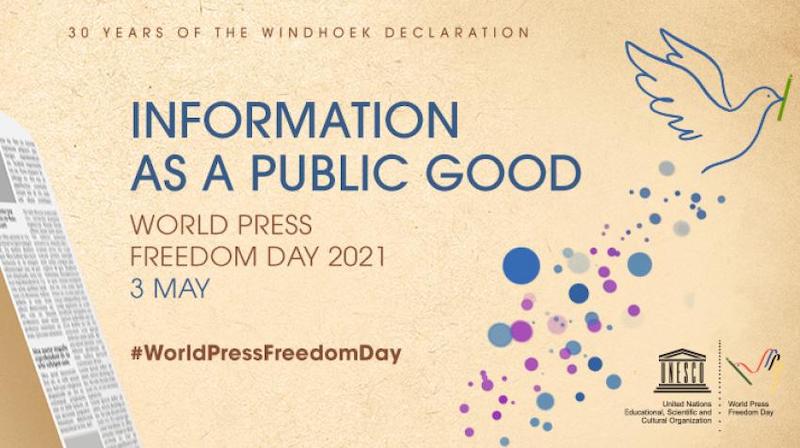 IPRA is proud to celebrate today the third of May, World Press Freedom Day 2021. This year represents 30 Years of the Windhoek Declaration in which IPRA was proud to play its part.

“On this day I think back to the active role of IPRA's former President Alain Modoux in ensuring press freedom,” says IPRA President Philippe Borremans. “He was the architect of the UNESCO proposal which led to the decision by the UN General Assembly to proclaim 3 May World Press Freedom Day. We have come a long way since 1991 when the Windhoek Declaration was signed but still 132 countries of the 180 surveyed for the World Press Freedom Index 2021 are labelled from ‘very bad’ to ‘problematic’ environments for press freedom. Journalists are blocked from doing their crucial work or even worse, persecuted and murdered.”

“The theme for this year's World Press Freedom Day is ‘Information as a Public Good’. When you read this as a professional communicator you can't but see the clear link to what creating trustworthy public relationships is all about. George Orwell stated it clearly: ‘Freedom of the Press, if it means anything at all, means the freedom to criticize and oppose.’ Let's all support this freedom, not only today but every day. I wish every journalist out there a safe World Press Freedom Day,” says Borremans.

In 1991 former IPRA president Alain Madoux oversaw UNESCO public relations. In that capacity, he organized in May 1991, in Windhoek, Namibia, a seminar on Promoting an independent and pluralistic African press. From that meeting came the Windhoek Declaration, on the importance of a free press in Africa.  IPRA President 1991, Charles van der Straten-Waillet represented IPRA at the meeting. Alain then piloted a diplomatic process through Paris (UNESCO) and Geneva (ECOSOC), to the UN General Assembly in New York. The result was the decision by the UN General Assembly, in December 1993, to proclaim 3 May World Press Freedom Day.  And it has been so ever since. Read the full story here.

IPRA, the International Public Relations Association, was established in 1955, and is the leading global network for PR professionals in their personal capacity. IPRA aims to advance trusted communication and the ethical practice of public relations. We do this through networking, our code of conduct and intellectual leadership of the profession. IPRA is the organiser of public relations' annual global competition, the Golden World Awards for Excellence (GWA). IPRA's services enable PR professionals to collaborate and be recognised. Members create content via our Thought Leadership essays, social media and our consultative status with the United Nations. GWA winners demonstrate PR excellence. IPRA welcomes all those who share our aims and who wish to be part of the IPRA worldwide fellowship. For more see www.ipra.org