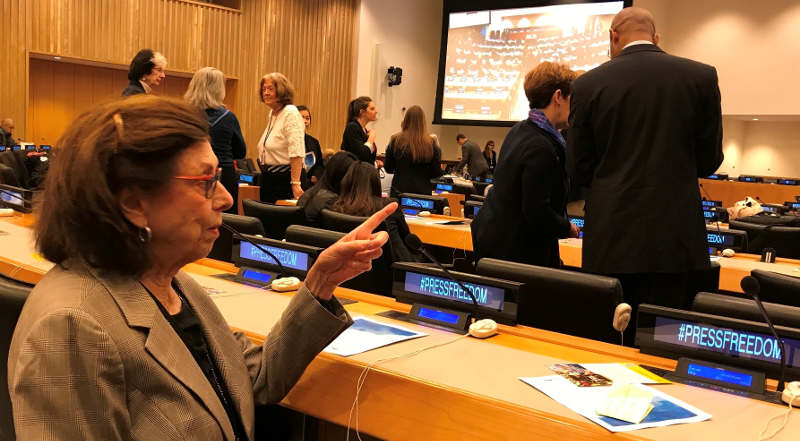 The United Nations held its annual conference on the state of global press freedom, and panellists said they were clearly worried about  the erosion of trust with the media, and the increasing dangers posed to journalists.

The conference recognized the increasing difficulties that the media is facing in its role to advance peaceful, just and inclusive societies which is a key UN Sustainable Development Goal. UN Secretary-General Antonio Guterres emphasized the media’s societal role in giving “a voice to the voiceless” while Margaret Novicki, DPI’s officer-in-charge, told the conference that in order to defeat the phenomenon of fake news journalists must be free to gather “reliable information from multiple sources.”

The conference noted that 827 journalists have been killed in the past decade, many in regions of conflict, and many also were victims of suspected government-related complicity.   A mere handful of the killings were resolved with charges or convictions. Another communications industry issue is the need to “offer counter narratives to challenge the ideas promoted in violent extremism narratives” that are aimed against “women journalists, politicians and personalities.”

The digital evolution “has enhanced opportunities for access to information, the creation and sharing of knowledge, facilitating exchange as well as intercultural dialogue,” according to a DPI conference note. “However, the rise of online hate speech shows that digital technologies also carry with them a number of challenges.” While the event focused on the role of media freedom, much of what was discussed raised collateral communications issues, such as the need for accuracy, transparency and vigilance in public relations.

IPRA, the International Public Relations Association, is the leading global network for Public Relations professionals. Membership is individual not corporate. It aims to further the development of open communication and the ethical practice of public relations. IPRA fulfils this aim through networking opportunities, its code of conduct and intellectual leadership of the profession. IPRA is the organiser of the annual Golden World Awards for excellence – PR's global awards scheme.  With 60 years of experience, IPRA, recognised by the United Nations, is now present throughout the world wherever public relations are practised. IPRA welcomes all those within the profession who share its aim and who wish to be part of the IPRA worldwide fellowship. For more information please visit: www.ipra.org