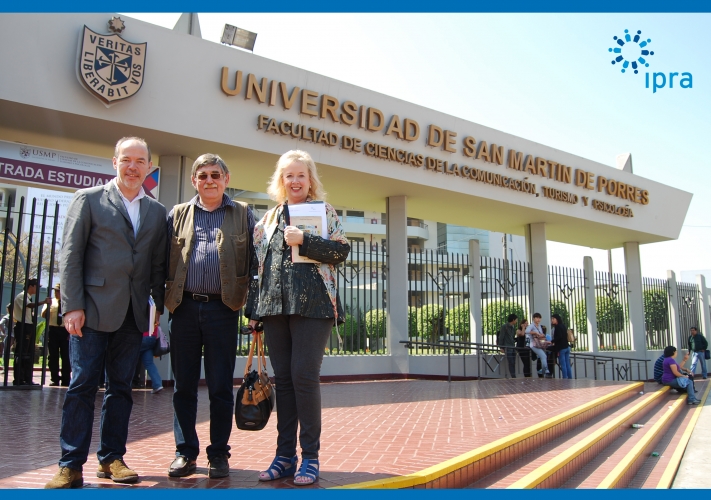 Universidad de San Martín de Porres (USMP) based in Lima- Peru was awarded the IPRA President´s Award, the highest honor granted by the International Public Relations Association (IPRA) -a worldwide organization bringing together public relations practitioners from all over the globe- for its permanent labor and contribution to research in Public Relations as well as to position  the profession in the Latin American region developing relevant international events and undergraduate, graduate and specialized academic programs.

IPRA President´s Award is the most important recognition awarded by London-based IPRA to celebrate outstanding institutions and individuals searching for better ways of understanding worldwide. Each year at the discretion of the President of IPRA and the approval of the Board of Directors is elected an organization or individual who have utilized the tools of mass communication to promote the principles of peace, social justice, cultural understanding or the role of public relations.

Since 1977 IPRA has awarded prestigious institutions and prominent individuals from Europe and North America. Now the USMP as the first institution in Latin America to be granted this recognition joins the list of organizations such as the Nobel Foundation, the International Red Cross, the United Nations University for Peace, KLM- Royal Dutch Airlines and worldwide respected celebrities such as John Graham, Edward L. Bernays, Sean McBride, Lucien Matrat, Al Gore, J.K. Rowling, Harold Burson, James and Larissa Grunig, among others been awarded over the years.

The award ceremony without precedent in the Latin American region was held past May 8 with the presence of IPRA´s Past President Johanna McDowell (South Africa); IPRA´s President 2013 Christophe Ginisty (France), and IPRA´s CEO James Holt (London), as well as Dr. Johan Leuridan Huys, Dean of the Faculty of Communication Sciences, Tourism and Psychology from Universidad de San Martín de Porres.

The Faculty of Communication Sciences, Tourism and Psychology from Universidad de San Martín de Porres offers quality education to the highest standards and is supported by important international certifications such as the Latin American Council for the Accreditation of Education on Journalism (CLAEP), the Axencia para a Calidade do Sistema Universitario de Galicia (ACSUG), the Certification in Education for Public Relations (CEPR) granted by the Public Relations Society of America (PRSA), and the TedQual certification granted by the World Tourism Organization (UNWTO). National and international agreements, work opportunities, student exchange, modern facilities and technology are our principles for a solid professional and humanistic world-class education.